“It’s true I always try to be as seductive as possible, but I wouldn’t be here if I couldn’t play tennis.”–Anna Kournikova 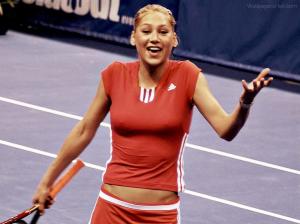 Rybarikova…Rodionova…Cepelova…Strycova…Pronkova…to the uninitiated these names may sound like they came straight from the roster of the Moscow Ballet.   In fact, they are just a handful of the 21 players whose last names end in “ova” in the Women’s singles main draw at the U.S. Open Tennis Championships now into the second week of play.   It seems that eastern European women would rather play tennis than dance–and why not? There is certainly more money in hitting those little yellow balls around.

So what about the men?  C’mon, now, you know better.  Men don’t have ova.   No, really.  There is not a single “ova” name in the men’s singles draw.    So where are all the Eastern European men whose surnames end in “ova?”  Hmm.  Maybe we should check the roster of the Moscow Ballet.

On the subject of the above quoted Anna Kournikova, it should be noted that the reigning USTA junior girls champion,  15-year-old American CiCi Bellis became the youngest woman to win a main draw singles match at the US Open since Kournakova in 1996.     And whom did Bellis beat?  Why Dominka Cibulkova, of course.

As for those of the “Y” chromosome persuasion, it seems the Eastern Europeans also contribute, with notable names including Czechs Blaz Kavil and Jiri Vesely and Slavakian Luckas Lacko.  All three were all somewhat lacko, though, and got knocked out in the early rounds, as did  Fecundo Bagnis, who just might be Bilbo Baggins’s Argentinian cousin. 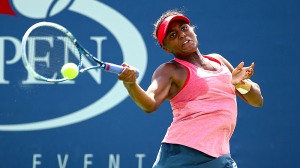 Batten down the hatches, there’s a Tornado coming.

In the juniors,  the best name is a holdover from last year’s girl’s finals.  That would be Tornado Black.  What makes her name even more awesome is that her younger sister, Hurricane Black,  should be along to join her in a couple of years.  Who could ever hope to beat a doubles team named Tornado and Hurricane?

We can’t leave out the boy’s junior draw, where promising up and coming names winning first round matches included Korean Duckhee Lee and Americans Usue Maitane Arconada and Taylor Harry Fritz.  That last one is worthy of some discussion.  We’ve at times made comments about people who have two first names (like the eponymous Tommy John) and two last names (think Harrison Ford).  But in this case, we are looking at last name first and first name last.  Or for that matter,  maybe it’s inside out.  Taylor Harry Fritz?   Harry Fritz Taylor?  Fritz Taylor Harry?   No matter, as long as he wins.

I’ll actually be at the Open today…I’ll report in through the comments if I see any other newsworthy names anywhere else.   Anywhere.   Chair umpires, beer vendors, washroom attendants.  Don’t ever assume that I have a life.

Cheers 🙂   (more of my insanity at www.millenniumconjectures.com)

"The best way to predict the future is to invent it."-Alan Kay; Let's invent a better future, together.
View all posts by Mark Sackler →
This entry was posted in funny names in sports and tagged Anna Kournakova, CiCi Bellis, culture, news, sports, Taylor Harry Fritz, tennis, Tornado Black, US Open, US Open tennis. Bookmark the permalink.