The week before Labor Day weekend, my better half and I spent some time driving around. We noticed two things, incredible weather and every imaginable iteration of the Ford Mustang, from the Shelby convertible to the original “1965”.

It got me to thinking about the man responsible for getting these cars onto the streets, Lido Anthony “Lee” Iacocca. 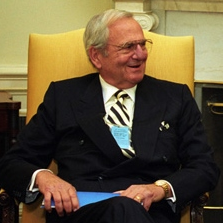 If you want to know what kind of impact this man had on our society, try misspelling his last name and see if your spell checker doesn’t autocorrect you . . . I’ll wait. 😉

And he brought us the Ford Pinto with the controversy over the fuel tank design. And was quoted as saying “Safety doesn’t sell”.  And was the impetus for engineering ethics courses to use it as an example of poor cost-benefit analysis.

A lesson in spontaneous combustion or a lesson in engineering?

In the late 1970’s Chrysler Corporation verged on collapse. They courted Iacocca to take over. The company losing millions from the recalls of the Dodge Aspen and Plymouth Volare—the jingle from the commercial is still stuck in my head to this day. Volaré oh oh . . .  sorry I digress.

Henry Ford II fired Iacocca and Hal Sperlich because he wanted nothing to do with the Mini-Max project, a re-invention of the mini-van. Iacocca took the job at Chrysler, hired Sperlich and several other former members of his team at Ford.

He pared down Chrysler. Realizing this would not save the company he did something very controversial, he asked for government guaranteed loans. At the time, Chrysler did not borrow a dime from the government, but that’s not how the public perceived it.

With the guaranteed loans, he introduced the Dodge Caravan and Plymouth Voyager—the direct descendants of the Hal Sperlich’s Ford Mini-Max project. They led sales for Chrysler for 25 years. Followed by the subcompact Dodge Omni and Plymouth Horizon—again a Ford rejected project.

In the midst of this, his wife of twenty-seven years, Mary, died in 1983 from complications of Diabetes. Before and after her death, Iacocca was a strong advocate for better medical care for diabetics. He founded the Iacocca Foundation for Diabetes research. He married two more times but neither marriage lasted.

In 1987 he lead the acquisition of AMC bringing Jeep under the Chrysler umbrella.

He retired in 1992 from Chrysler as President, CEO, and Chairman of the Board.

But he didn’t stop there. In 1995 he assisted Kirk Kerkorian’s hostile takeover of Chrysler. The take over failed. But the next year Kerkorian and Chrysler came to a five-year agreement, which included a gag order preventing Iacocca from discussing the deal.

In 2005, Iacocca returned to the airwaves as the Chrysler pitchman. Part of his agreement with DaimlerChrysler—a $1.00 per car donation for every car sold between July 1 and December 31, 2005 to the Iacocca Foundation.

Iacocca wrote books, created businesses, remained an active philanthropist, advised Presidents. He’s even got his own blog. And he turns 90 in less than a month.

Writing since she could first hold a pen, Tracy Perkins formed her alter ego, "Fannie Cranium" at the suggestion of her husband. Tracy understands smiling makes people wonder what she’s been up to.
View all posts by Fannie Cranium →
This entry was posted in Uncategorized and tagged biography, Chrysler, Ford Mustang, funny names, humor, humour, writing. Bookmark the permalink.