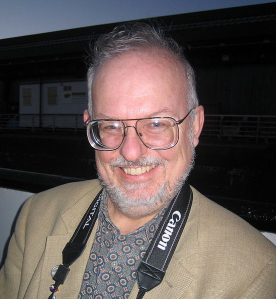 Greg Bear wrote a book, more than one. (Photo by Geoffrey A. Landis)

Polish up your geek glasses people, I’ve just spent a month driving close to 9,000 miles with my husband and we’re rolling it into high gear.

Fortunately for me, jocks need nerds and my husband understands my need to geek. He helped me check off an item on the bucket list—jumping over the continental divide . . . feel free to join me. And 5, 6, 7, 8: East, west, east, west. (Shades of lumbago, I needed the exercise after being in the car that long.)

In 2013, we ended the BoFN year with Gary Gygax, founder of Gen Con, the gaming convention. Now Halloween approaches, and costumes will be in full force, let’s segue to our latest installment of geekitude: Author, artist and founding member of Comic-Con San Diego—Greg Bear. Not to be confused with black bears, which I saw plenty of during my trip.

See what I mean?

Greg shared the same home town as our esteemed colleagues, Dave and Arto—San Diego, California. Is it something in the water or the sunshine down in San Diego?

Somewhere in the late 1960’s a group of high school friend, including but not limited to Greg Bear, Shel Dorf, Ken Krueger and Richard Alf founded San Diego Comic-Con.

Ray became one of their first guest speaker when the event kicked-off (not the dying kind) from August 1st through 3rd, 1970 in the U.S. Grant Hotel. The event hosted 300 attendees in the basement. Now Comic-Con hosts in excess of 130,000 yearly at the San Diego Convention Center plus additional venues.

Back to Mr. Bear, his dad joined the navy, so they moved a lot: Japan, the Philippines, Alaska, and various other parts of the United States. While living in Alaska in 1961, Greg completed his first short story at the age of ten.

Later he attended San Diego State University receiving a Bachelor of Arts degree. While there, he was a teaching assistant to Elizabeth Chater in her course on science fiction writing. Shades of foreshadowing . . .

His art work appeared on the cover of his books. He and his wife, Astrid Anderson Bear (daughter of Sci Fi author, Poul Anderson)—founding members of ASFA, the Association of Science Fiction Artists. He no longer produces commercial artwork, directing his attention to writing full time.

He’s completed over 44 science fiction novels, multiple short stories, consults for Microsoft, Google and other software companies, and, in addition, numerous governmental agencies . He even appeared as himself in the Sunday funnies in the comic Funky Winkerbean.

On September 23rd, he suffered a major heart attack at his home outside Seattle, Washington, He underwent emergency valve replacement surgery. We want to wish him a speedy recovery.

Writing since she could first hold a pen, Tracy Perkins formed her alter ego, "Fannie Cranium" at the suggestion of her husband. Tracy understands smiling makes people wonder what she’s been up to.
View all posts by Fannie Cranium →
This entry was posted in funny names in science, humor, humour and tagged Author, funny names, science, science fiction, writing. Bookmark the permalink.