Today’s post spotlights Russian painter Wassily Wassilyevich Kandinsky (1866-1944). Born in Moscow to Lidia Ticheeva and Vasily Silvestrovich Kandinsky, he recalled being fascinated and stimulated by color as a child. He attended the University of Moscow, studying law and economics, as far from painting as the east is from the west. His interest in art began at the mature age of 30, at which point he settled in Munich, studying at Anton Ažbe‘s private school.

Kandinsky compared painting to composing music, writing, “Color is the keyboard, the eyes are the hammers, the soul is the piano with many strings. The artist is the hand which plays, touching one key or another, to cause vibrations in the soul.” Check out these good vibrations.

Munich Schwabing with the Church of St. Ursula

He focused on landscapes and towns, rather than human figures, except for Sunday, Old Russia (1904). Kandinsky spent the years from 1906 to 1908 travelling across Europe as an associate of the Blue Rose symbolist group of Moscow, settling in the Bavarian town of Murnau. During this time, The Blue Mountain (1908–1909) was painted, demonstrating his trend toward abstraction. I’m not keen on abstract art, so I’m delighted that we can make out horses and riders, as well as said blue mountain. 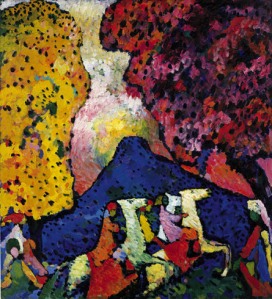 But Kandinsky was not a one-trick pony. In addition to painting, he was an art theorist. He helped found the Neue Künstlervereinigung München (Munich New Artists’ Association). When the group dissolved two years later, he then formed a new group, the Blue Rider (Der Blaue Reiter). At the onset of WWI in 1914, he returned to Russia. In 1917, at the age of FIFTY-ONE , he finally broke down and got married to a woman named Nina Andreievskaya. Again, he compared music to art. Imagine this being said in a Russian accent:

The sun melts all of Moscow down to a single spot that, like a mad tuba, starts all of the heart and all of the soul vibrating. But no, this uniformity of red is not the most beautiful hour. It is only the final chord of a symphony that takes every colour to the zenith of life that, like the fortissimo of a great orchestra, is both compelled and allowed by Moscow to ring out.

Nice as that sounds, it was time to get going. In 1921, he was invited back to Germany to attend the Bauhaus (no, not Peter Murphy’s goth-rock band) school of art, where he began teaching until the Nazis closed it in 1933. Not crazy about Nazis, he left Germany for France, where he spent the remainder of his life.

In 2012, Christie’s auctioned Kandinsky’s Studie für Improvisation 8 (Study for Improvisation 8), a 1909 view of a man wielding a broadsword in a rainbow-hued village, for $23 million. I bet that would have been music to his ears.

Like Loading...
This entry was posted in humor and tagged art, Bauhaus, Kandinsky, Painting. Bookmark the permalink.