Aloe Blacc Couldn’t Go on as a Trumpet-Playing Egbert

So I was watching one of the happy time-and-space filling Christmas afternoon holiday specials on that big day when who should pop up amid the musical segments but one Aloe Blacc. It was an interview about the meaning of Christmas, and this man of a Funny Name revealed that his father was one of 13 children.

That’s a lot of wrongly spelled Blacc’s spilled out into our world, I immediately thought on this blessed afternoon. Also: Yes, indeed, I have pinned down my subject for this here installment of The Blog of Funny Names.

And so I dove into the history of this curiously and funny-named, first-and-last, singing sensation whom I’d previously seen and raised both eyebrows over, one at a time mind you, when he was a guest mentor on one of my favorite TV singing competition shows, “The Voice.”

This gentleman was born in 1979 to Panamanian parents. (And for this and the facts to follow I thank writer Marisa Brown on allmusic.com and the host of ghost contributors on wikipedia.com.) Alas, he was not at birth given this skin-smoothing and -cooling name of Aloe, nor the oddly but somehow mesmerizingly coded Blacc. He gave his first singing performance of “waaaah” to the world as Egbert Nathaniel Hawkins III. Great and good, a funny real first name, too, and the third straight in his family lineup of Hawkins, yet!

Growing up in Orange County in sunny southern California, young Egbert began playing a rented trumpet in the third grade. When he showed enough talent that his parents decided it was time to buy him one instead, he told an interviewer in 2010, he knew he had to take this music thing seriously, what with two previous Egbert Nathaniels to live up to in some way, shape or form. In fourth grade, he heard the music of LL Cool J. And he knew he had to take hip-hop seriously, what with the name Egbert Nathaniel to someday escape from with a new, cooler handle. When he got out of high school, he went to USC, graduated in 2001, went into the corporate world and worked for the funny name firm of EY. No, not a hip-hop label. That would be London “big-four” audit firm Ernst & Young. 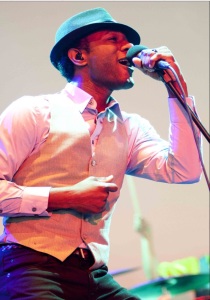 Aloe Blacc, cool with a dollar. (From wikipedia)

Now, for some fun. Why Aloe Blacc? According to writer Reyan Ali (great first name!) of his hometown occweekly.com …

“Aloe Blacc chose his name for smoothness’ sake: the first name references the plant associated with lotion and he exchanged the K in ‘Black’ for another C because he considers K a harsher consonant. When he was still deliberating a moniker, other names included Aeolus (which resembles Aloe) and Sirocco, two words for specific types of wind.”

Aelous Sirocco might have been better for this blog. But I can picture both of those names being used by a car company for a new model down the line now that Egbert went elsewhere, though. The 2018 Hyundai Aeolus! The 2020 Fiat Sirocco!! Unless we get our Jetsons cars first, that is. Then it will be the Spacely Sprockets Aeolus!!! The Cogsley Cogs Sirocco!!!!

Whoops. Back to his funny music names. In 1995, he had formed a hip-hop group called Emanon with a producer named Exile. Emanon is No Name spelled backward. Hip-hop being what it is, he also worked with a collective called Lootpack. 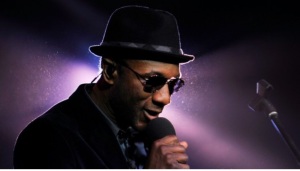 I know you wouldn’t look back at me like that, ladies, if I had stayed Egbert. (Getty Images)

In 2003, Aloe Blacc began to concentrate on his solo career, and in 2006 he was signed to Stone Throw Records by Chris Manak, the label head who was better known throughout the business as Peanut Butter Head. (Take note, Liz!)

But his first big hit came from another album that came out that year, “Good Things.” A single from that one, “I Need a Dollar,” was so true, true, true, that it sold a million copies and was used as the theme song for the HBO show “How to Make It in America.” 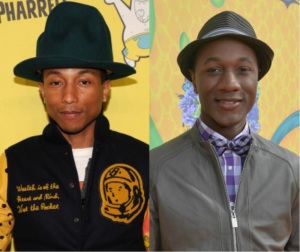 After that, Blacc celebrated by joining another project with a funny name, Roseaux, write a hit song, “Wake Me Up,” with a Swedish DJ with a funny name, Avicii, and wear a funny hat in every picture taken of him. No, not quite as funny as funny-named Pharrell’s famous funny hat.

Mark Bialczak is a veteran journalist. He started his blog, markbialczak.com, in February, 2013, to write about music, entertainment, sports and life.
View all posts by markbialczak →
This entry was posted in funny names in music and tagged Aloe Blacc, Hip-Hop, humor, humour, Pharrell, Soul music. Bookmark the permalink.