“Awards do not pay the mortgage.”–Kevin Chamberlin

Now, let’s get down to business.  2014 may be over, but the awards season for its achievements is just beginning.  Not to be outdone, let’s be the first to throw out meaningless accolades in the new year, with the second annual Outerbridge Horsey Awards, honoring the best of the past year’s funny names previously covered in these pages.  Yes, we do consider it an honor.  By the way, due to numerous complaints from readers, we have dropped last year’s requirement that you be wearing a tuxedo or evening gown when you read this post.  But please, no tank tops or bare feet;  and if you do chose formal attire, wearing both a tuxedo and an evening gown at the same time would be awesome!

It’s going to be tough to outdo last year’s winners.  How do you top the likes of 2013 Funny-Named Athlete of the Year, Barkevious Mingo  and 2013 Funny Name in the News of the Year, Janice “Lokelani” Keihanaikukauakahihuliheekahaunaele?  The latter  should also win a special achievement award as the longest name ever presented herein–or maybe anywhere else for that matter.   Anyway, we may not be able to top them, but let’s give it a go.

Two of these will be awarded for Englebert Humperdinck. Sadly, this still doesn’t make a whole horse.

We’ll start with a bit of nostalgia and bestow the 2014 Funny-named Entertainer of the Year on Engelbert Humperdinck.  Both of them!  The cheesy 1960’s and 70’s British pop singer and the not-quite-as-cheesy 19th century German opera composer.   British Englebert had a number of top 40 hits back in the day, the first and biggest of which, Release Me, peaked at #4 on the Billboard Hot 100 in April of 1967.  German Englebert composed any number of forgotten hodge-podges, but had one smashing success, Hänsel und Gretel, which premiered in 1893 under the baton of one Richard Strauss.  It has held down the #1 spot on the Fairy Tale-Themed Opera hit parade for most of the 120+ years since.  Oh, he also had a cheesy pop singer copy his name.  Our correspondent Kerbey originally profiled the British Engelbert back in April of last year, and included a shout out to the late German composer.

Next up is the 2014 Funny Named Athlete of the Year award, and the field of nominees is a crowded one.  With the likes of World Series MVP and Sports Illustrated Sportsman of the Year Madison Bumgarner, Funniest Names in the NFL Draft poll runner-up Jadaveon Clowney,  Minor League Baseball Moniker Madness runner-up Joey Pankake,  and probable NFL Offensive Rookie-of-the-Year Odell Beckham, Jr. all in the running, it’s going to be hard to pick a winner.   But since we have to,  the envelope please!

And the winner is….none of the above, because there is just no way we can deny our readers’ wishes.  The winner is the 2014 Funniest Name in the NFL Draft poll champion Ha-Ha Clinton Dix.   He was not chosen as early in the NFL draft as Clowney and did not have as great a rookie year as Beckham, Jr.  But he sure led the league in bad jokes on his name.

Next, we move on to Funny-Named Politician of the Year. I was very tempted to delve into the realm of nostalgia again, and award posthumous trophies to two classics I profiled back in July:  Harry Baals and Wankard Pooser.  But those names are in such an elite class of their own, it seems almost unfair to award them Horseys.   So instead, we’ll actually name this award after them, and give the 2014 Wankard–Baals Award for the funniest name in politics to one Zephyr Rains Teachout.   Profiled by Arto back in September, Ms. Teachout had the audacity to challenge the unfunny-named, but very powerful Andrew Cuomo, for the New York Democratic gubernatorial nomination.  She lost; but she won our hearts.  Being that she is a professor of constitutional law–a teacher!–at the Vermont School of Law, we need to create another new honor for actually being her name.   Let’s call it the Major Major Major Major Aptly-Named Award.   Too bad she doesn’t look like Henry Fonda;  the image below could have been her campaign poster.

Moving on to the 2014 Funniest Name in the News Award, we have a dilemma.  Nothing could possibly top the aforementioned 2013 winner, Janice K.  We have limited storage space on WordPress, so we can only spell out her name so many times, even though the abbreviation makes her appear to be the sister of  Joseph K., from Kafka’s The Trial.   And again, space limitations prevent us from naming the award after her.  So let’s be brief.  The winner this year is pop singer Iggy Azalea, for repeated news mentions mainly due to legal problems and for having a name that sounds more like a coniferous evergreen than an actual person.  She was first covered here in a Funny Names in the News post in August.  Hopefully this will be her last mention.

And now, the moment we’ve all been waiting for–well, I’ve been waiting for it because my hands are cramping up from all this typing–the ultimate award, The 2014 Funny-Named Person of the Year.

May we have a drum roll please.  Ratattattat

And now a trumpet fanfare.  Tarantara

And finally, one stupendous, ear-splitting volley of flatulence!  Pffffffffffttttttttttttt!

And if that introduction did not clue you in to the identity of the winner, you clearly have not been reading this blog very closely.   Because, yes, our winner is the man who famously described his own name as sounding like “a fart in a bathtub,”  the irrepressible British actor Benedict Cumberbatch.  He’s been nominated for both an Emmy as best actor for his portrayal of the title character in the BBC  TV series Sherlock, and for a Golden Globe as best actor for his portrayal of Alan Turing in The Imitation Game.  He’ll almost certainly get an Oscar nomination for the latter role, as well.  But he doesn’t have to wait to actually win an award.  He’s got one now.  So let’s give him a big round of applause and drown out all that flatulence.  Or at least the sound of it. 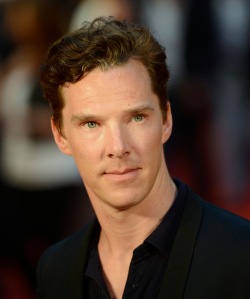 Benedict Cumberbatch, Funny-Named Person of the Year. Only his name is flatulent.

Check out the insanity on my own blog here,  and have a happy and prosperous 2015