Fan Bingbing (or Bingbing Fan, depending on your Chinese name transcription preferences) is a super popular Chinese film and TV actress, with a delightfully airy name. Just say it, “Fan Bingbing”. Quite fun, eh? 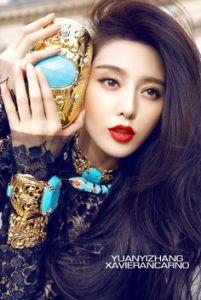 Fan was ranked the number one most influential Chinese celebrity twice in a row in 2013 and 2014 by the Forbes China Celebrity 100 list, which is a thing, saying something about her popularity. She has been nominated for or won a number of well named acting awards, including the Golden Rooster, Golden Horse, Golden Bauhinia, and of course the Hundred Flowers awards. That’s a lot of golden stuff. And bauhinias, whatever that is.

Western audiences may have spied her in the recent blockbuster X-Men : Days of Future Past (A “whoa”-inducing title for stoners if I’ve ever seen one) where she played a mutant named Blink, who has the ability to teleport from place to place. This seems like a great skill, particularly in Hollywood where traffic can be murder. Come to think of it, it may be even more useful in China, where I once rode in a taxi that mounted a sidewalk at 40 miles per hour because the street was a tad too crowded for the driver’s liking.

She also appeared in the 2013 superhero film Iron Man 3, in a some-might-say cynical ploy to increase Asian box office grosses. She can only be seen in the version of the film released in China, which tells you something about how necessary the character is to the film’s story. The plot worked though – Iron Man 3 was the year’s second biggest hit in China, just behind the intriguing sounding Journey to the West : Conquering the Demons, which I picture as a Journey concert film, and just ahead of the less intriguing sounding Personal Tailor.

She also wears super cool green head thingies at times. We like that.

We may well see more of Ms. Bingbing in the near future, since her overwhelming fame in her native land is likely to attract more international suitors (or personal tailors, even!). All hail Fan Bingbing!

Co-founder of the Funny Names Blog, Hawaiian shirt enthusiast, and holder of a funny name himself with too many vowels for any sensible person. Currently residing in San Diego, California, scouring through obscure documents on a hunt for more funny names. www.funnynamesblog.wordpress.com
View all posts by Arto →
This entry was posted in Uncategorized and tagged actors, art, celebrities, cinema, comedy, entertainment, funny, funny name, humor, humour, movies. Bookmark the permalink.