Leonard Nimoy, Everybody’s Spock, Was Beamed Up for the Last Time, Doc

The world lost a man last week whose passing was marked with sad and loving words by space freaks and TV/movie geeks of several generations.

And today the Blog of Funny Names must bow its head to the legend of Leonard Nimoy, a man who through the wonderful mind of Gene Roddenberry and TV cameras of NBC on Sept. 8, 1966, brought the U.S. a pointy-eared Vulcan by the name of Spock.

This emotionless crew member stood at the side of Captain James Kirk on the Starship Enterprise through space frontier expeditions and escapades. You might be surprised to discover Star Trek ran for just three seasons. But it lived on in syndication, and spawned future generations of TV shows and crews, and then became a movie, with sequels and more evolution.

Colorful on NBC. (From iMDb)

He was the lone alien on that rainbow bridge of humanity — William Shatner as Captain Kirk, DeForest Kelley as Dr. McCoy, George Takei as helmsman Sulu, James Doohan as chief engineer Scotty, Nichelle Nichols as chief communications officer Uhura and Walter Koenig as navigator Chekov) — being beamed up from trouble by Scotty. He was Spock. He could not escape it.

In fact, he wrote two autobiographies about it.

From his Feb. 27 obituary by Virginia Heffernan in the New York Times:

“Yet he also acknowledged ambivalence about being tethered to the character, expressing it most plainly in the titles of two autobiographies: I Am Not Spock, published in 1977, and I Am Spock, published in 1995. In the first, he wrote, ‘In Spock, I finally found the best of both worlds: to be widely accepted in public approval and yet be able to continue to play the insulated alien through the Vulcan character.’ ”

Then this kid growing up in the Star Trek TV era had issues further complicated when siblings were born and I heard parents talking about methods suggested by Spock.

It took awhile to figure out that my two younger sisters were not being Vulcanized but rather they and even I may have been being made aware of principles set forth by one Dr. Benjamin Spock.

This funny name wrote, too, and Baby and Child Care is one of the biggest selling books of all time. Says WikiPedia: “Spock was the first pediatrician to study psychoanalysis to try to understand children’s needs and family dynamics. His ideas about childcare influenced several generations of parents to be more flexible and affectionate with their children, and to treat them as individuals.” 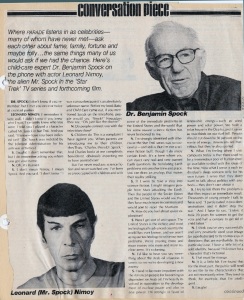 How wonderful that Parade Magazine interviewed Spock and Spock in 1977. (Getty Images)

It goes on to add how he was an advocate for ending the Vietnam War, and that he won an Olympic gold medal in rowing in 1924. Another good Spock in my book, this doctor-writer with the funny last name who died in 1998 at the age of 94.

Leonard Nimoy was 83 when he died from pulmonary disease, the actor a smoker, ironic considering his stoic Vulcan character that made him famous.

And yes, this funny-named fellow was plenty famous. You have to be to get an obituary in the New York Times with a paragraph like this: “His artistic pursuits — poetry, photography and music in addition to acting — ranged far beyond the United Federation of Planets, but it was as Mr. Spock that Mr. Nimoy became a folk hero, bringing to life one of the most indelible characters of the last half century: a cerebral, unflappable, pointy-eared Vulcan with a signature salute and blessing: “Live long and prosper” (from the Vulcan “Dif-tor heh smusma”).”

Dif-tor heh smusma. Funny way to say it, unless you’re a Trekkie.

Here’s the link to the New York Times obituary.

Here’s the link to the WikiPedia listing for Star Trek.

Here’s the link to the WikiPedia listing for Benjamin Spock.

39 Responses to Leonard Nimoy, Everybody’s Spock, Was Beamed Up for the Last Time, Doc