Without Akeeba and Rose, We Wouldn’t Have Neil Leslie Diamond’s Touching Story

Two generations ago, Rose Rapaport met and married a man with the funny name of Akeeba “Kieve” Diamond. The Polish and Russian immigrants fell in love, got married, and to Brooklyn and the world they gave a baby boy.

For his first name they picked Neil, normal enough. For his middle name they went with Leslie, a girl’s name mostly, but that didn’t seem to bother him much. Neil Leslie Diamond went on to become Pretty Dang Famous. You might have heard of this singer, songwriter and guitarist. He was inducted into the Songwriter’s Hall of Fame in 1984 and the Rock and Roll Hall of Fame in 2011. I almost typed indicted, but no. Not that type of funny stuff for Neil Diamond, we don’t think.

I Am Hair Man (From Getty Images)

I remember in the 1990s, seeing the deeply black-haired man perform in the round in the Carrier Dome in Syracuse, N.Y. In the middle of his set, with the crowd of all ages screaming happily along with his hit songs, the power went out. So Neil Diamond put the microphone in its stand, dropped his black tux pants to reveal bright red boxer shorts, and continued singing a cappella. His powerful voice filled the cavernous football stadium. People shut the hell up and listened. When the power came back on Diamond picked the microphone back up and said: “The show must go on.”

And cool for a guy who has become curiously hip after a career in which at times he has been considered the butt of pop culture’s wink-winks, as unhip-as-they-come.

When Diamond was growing up in Brooklyn, he thought he was going to become a laboratory biologist. At NYU, he was a member of an NCAA championship fencing team. High and Mighty. Instead, a taste of songwriting for $50 a week won him over.

“It was a real hand-to-mouth existence in those early days. I’d have whatever dry cereal there was in the house for breakfast, 30 cents to spend on lunch and a hot dog for dinner. I did that for years. So there was definitely a hunger in me, of various kinds, to succeed,” he is reported as saying about that time.

Yeah. The songs rolled out. Funny stuff and deep stuff and stuff that made people scratch their heads.

In 1979, he had a hit with “Forever in Blue Jeans,” and “Saturday Night Live” funny man Will Ferrell later worked him over good as a lounge lizard, but it also made a damn fine commercial for The Gap and likely a second boatload of bucks, didn’t it? He starred with Barbra (where’s your third ‘a’ Babs?) Streisand on the duet “You Don’t Bring Me Flowers,” but ditched her for a planned movie to instead play a cantor in a 1980 remake of “The Jazz Singer.” That soundtrack gave him three hits, “Love on the Rocks,” “Hello Again” and “America,” but it also earned him the first-ever Razzie Award for Worst Actor.

He may have had a bit of an identity crisis from that sort of public skewering.

“There’s a mystery to writing, and you don’t really know where most of it comes from,” he said.

So write and play songs from wherever he did. He liked to put names in their titles, that is clear.

That last infectious tune came out in 1969, but it was decades later that it was adopted as a crowd sing-along. You’ve been out in a bar somewhere where a band covers the song or a DJ plays it, or in a baseball stadium between innings when they throw it on the PA, and the collective might of all those voices hits the resounding oh-oh-oh, right?

I never knew The Babe. (From Getty Images)

Or you’ve seen this phenomena on TV, after it spread to the big leagues, very famously to Fenway Park in Boston during the World Series, where they even brought the man who wrote it to sing it out on the diamond live and in person, where I thought Brooklyn’s Neil Leslie Diamond must surely be cringing inside somewhat while I watched on my flat screen, what with Yankees-Red Sox rivalry raging all these decades and all. Busting the curse of the Bambino, anyone?

Here’s something funny. Neil Diamond finally revealed in 2007 that he wrote “Sweet Caroline” as an ode to Caroline Kennedy. The song came out in 1969. She would have been 12. “Hands. Touchin’ hands. Reachin’ out. Touchin’ me. Touchin’ you.”

“I thought maybe I would tell it to Caroline when I met her someday,” Diamond said in a story on wcbsfm.cbs.local.com. He got that chance when he performed for Caroline on her 50th birthday. 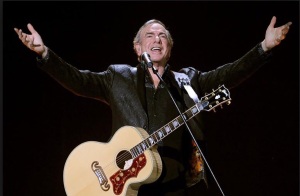 Next weekend, my dear wife Karen and I will be in the Verizon Center in Washington, D.C., so she can check both seeing a Neil Diamond concert and the cherry blossoms blooming around our other national monuments off her bucket list.

Here’s the link to the wikipedia site for Neil Diamond.

Here’s the link to the site for Neil Diamond’s quotes.

Here’s the link for the story about “Sweet Caroline.”

Here’s the link to the lyrics of “Sweet Caroline.”

28 Responses to Without Akeeba and Rose, We Wouldn’t Have Neil Leslie Diamond’s Touching Story