Happy Friday, one and all! I hope your days are all off to a delightful start. Dave-o here! Back from a wild bachelor party weekend in Cabo San Lucas, and ready to hit y’all with a blast of Funny Names In The News fun!

So much Funny Names in the News this week (partly due to us dedicating a special edition to our 100th FNITN recently!) that I’m going to have to do this in “bullet point and snarky remark” form! 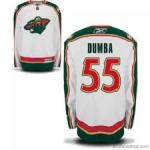 Is someone allowed to be a smartass and a Dumba55 at the same time?

We start off with a delightful piece of hockey news brought to you by stick-waving correspondent Arto(wizard), who informs us that Matt Dumba of the Minnesota Wild (Hi Liz!!!!!!) wears jersey number 55, so his jersey says Dumba55! Sounds like a smart choice to me!

From the ice rink to another use for arenas – megachurches – minister Creflo Augustus Dollar, known to many as a successful prosperity minister, got some PR recently for requesting a $60 million jet from his congregants. It also drew some pushback from taxpayer advocates! Some people say an abuse of power and tax-exempt status… I say NOMINATIVE DETERMINISM! (Even if people say Creflo “Dollar” isn’t pronounced like the currency).

In news about bands named after countries, but that aren’t country bands, an unknown BoFN correspondent  (I did some digging and found it was our favorite fiery Finn, Arto!)  informs us that Dewey Bunnell was one of the founders of the band America (remember “Horse with No Name” and “I Need You”?). The interesting news is that America turns 45 this year. That’s some serious longevity!! 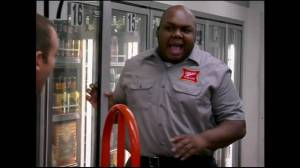 We miss you Windell! Hope you’re living the High Life up in Heaven!

Moving from civics to anatomy class, newscaster Natarsha Belling caused quite a stir recently with her oddly-shaped neckline. It’s actually not all that odd… a common shape, just not so common for a neckline. I’ll leave it to y’all to snicker about the outfit’s unusual feature.

On to some sadder news… BoFN favorite Windell Middlebrooks, whom we profiled back in the day, passed away at age 36 a few weeks ago. You may remember him as the Miller High Life guy, or from his appearances in various TV shows like Scrubs, Cougar Town, It’s Always Sunny in Philadelphia, Parks and Recreation, or many others. He’s been in a lot of shows, and will be greatly missed, but the High Life lives on!

Dikembe Mutombo agrees and says No No No, that’s not how to end a FNITN!

Windell wouldn’t want us to end this post on a somber note, and neither does our person, so we bring you some celebratory news featuring another BoFN mainstay. Dikembe Mutombo Mplondo Mukamba Jean-Jacques Wamutombo (known to the uninitiated as simply Dikembe Mutombo), was recently announced as an inductee into the basketball Hall of Fame! Dikembe decided to take a break from saving the world – seriously, that was such a ridiculously fun little web-based game from the time when weird people thought the world would end in 2012 – and join WNBA legend Lisa Leslie and another 9 folks in the Naismith Hall. Congrats Dikembe!

That just about does it for this week’s FNITN – join us next week when we cover all sorts of other Funny Names in the News that got squeezed out of this jam-packed edition!

Based out of San Diego, California. Co-founder of the Blog of Funny Names. funnynamesblog.wordpress.com
View all posts by Dave →
This entry was posted in Uncategorized and tagged basketball, hockey, humor, humour, sports. Bookmark the permalink.