Get on your Sparklehorses, folks! It’s another star-studded edition of Funny Names in the News… now completing its second year (104 weeks means 2 years, right? Right?!?)

First off, we’re going to lead with some funny names, but not so funny news from the world of sports. 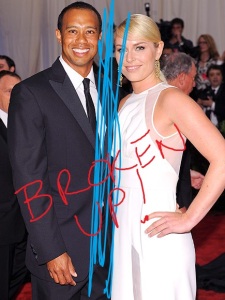 Eldrick Tont “Tiger” Woods and Lindsey Vonn, in the rough. Original artistic modifications by the BoFN’s very own Dave!

Golfer Eldrick Tont “Tiger” Woods (yes, his real name is Eldrick Tont Woods) is in back on the singles scene again after a recent breakup with Olympic skier Lindsey Vonn … but for unclear reasons. Some sensationalistic wack-job piece said that Woods cheated, then the bastion of good journalism, People Magazine had reports from multiple sources that he didn’t, but rather that they simply grew apart, as many couples are wont to do! Then Fox stepped in and helped resolve the matter by asking “Did Tiger Woods cheat?” and followed it with the shortest news article I’ve ever seen.

We don’t take sides here on the BoFN. All we know is that the guy can golf and helped break down a lot of the sport’s barriers, and we wish the parties a peaceful and smooth resolution to this.

Meanwhile, we’re having a bit of a crisis here at BoFN headquarters, as we’re trying to figure out how to fit some subtle PG-13 innuendos into a discussion about golf – there’s really no middle ground… they’re either nonexistent or extremely suggestive. Why can’t all sports be as cool as boxing (now everyone knows who’s writing this post), where they have phrases like “knockout” and “kissing the canvas.” Meanwhile, golf has terms like “ball”, “wood”, “shaft”, “hole in one”. I never thought I’d say this, but I wish golf were as gentlemanly as boxing!

So let’s just say we wish Eldrick Tont and Lindsey Caroline the best in this trying time.

Meanwhile, there is some good Eldrick Tont “Tiger” Woods news out there (I just love saying his full name)… former stutterer Woods sent a really nice letter to a stuttering child recently, and it reached the pages of Golf Digest. Check it out… pretty cool stuff!

Meanwhile, in Houston, there’s a new sheriff in town! Constable Ron Hickman was sworn in as the new Harris County Sheriff! He looks tough, I wouldn’t mess with the guy! Kids, stay on the right side of the law….

You won’t believe how far back in the archives I had to go to find this pic of Ras-I Alujah (nee Abuja, nee Livingstone) Bramble. But it was all worth it!

In the very popular Nigerian political news category, we have heard reports that the Nigerian Democratic Party’s chairman Norbert Mao has been taken to the hospital. Hopefully Nigerian President Goodluck Jonathan‘s good luck can give him a speedy recovery.

In other news, Nigeria’s capital recently changed from Lagos to Abuja, which reminds us of one of our favorite early BoFN posts… Ras-I Alujah (Abuja, Livingstone) Bramble … take a gander at that one if you’re feeling nostalgic.

Sparkle Lee is not to be messed with!

Lastly, in super cool boxing news, the esteemed Sparkle Lee is set to be enshrined in the Women’s Boxing Hall of Fame.

She will become the first ref inducted, and they couldn’t have chosen a better one. Sparkle is a former cop who turned boxing referee, and has found respect and tremendous success as a referee in both women’s and men’s matches. I most recently saw Sparkle Lee ref the Sergey Kovalev vs. Blake Caparello title bout, and those two 190-lb men clearly knew who was calling the shots! A huge congratulations to Sparkle!

Happy Friday everybody, and may your weeks be as successful as Eldrick Tont “Tiger” Woods was in 2000. I just love saying that name!

Based out of San Diego, California. Co-founder of the Blog of Funny Names. funnynamesblog.wordpress.com
View all posts by Dave →
This entry was posted in Uncategorized and tagged humor, humour, news, sports, writing. Bookmark the permalink.