“Apparently, we love our cell phones but hate everyone else’s”-Joe Bob Briggs 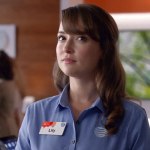 Milana Aleksandrovna Vayntrub (b. March 8, 1987,  Tashkent, Uzbekistan) is an American actress whom you may not have heard of,  but you have probably seen.   She plays the somewhat smug and condescending sales person, Lily Adams, in those maddeningly ubiquitous AT&T Wireless commercials.  She’s cute as a button, but there is something about the character’s attitude that just makes you want to reach into the screen and smack her.   If you live under a rock and don’t have a TV, here is an example featuring Vayntrub with media mogul and NBA Dallas Mavericks owner, Mark Cuban.

An even better example is the one linked here, with ex-NBA player Grant Hill.  Somebody high up in AT&T marketing must be getting great seats to the NBA finals.

Anyway,  she may be a funny named actress, from a funny named place,  but her acting career is certainly more mainstream when it comes to television monikers, and Lily Adams isn’t the only example.   Her family emigrated to the U.S. from Uzbekistan when she was three years old.  By the age of five she made her professional debut in a Barbie commercial.  It seemed her parents put her up to it because they needed the money.  It’s true American success story.   And Barbie and Lily make perfect sense for somebody whose middle name is Aleksandrovna.

The rest of her acting career has been mostly in short comedy films (they still make those?) and online-only releases.  But with obvious talent, and this kind of exposure, a breakout TV or movie roll can’t be far behind.    Is there a Horsey Awards nomination in her future for funny-named entertainer of the year?   I can’t yet say, but don’t ask Lily Adams unless you’re OK with a smug response.