It’s always nice to be the first in something. For instance, I was the first person in my house this morning to have some toast. A great feeling.

Similarly accomplished in her life has been Vigdís Finnbogadóttir, the former President of Iceland. She can count among her accomplishments being the world’s first elected female head of state, and according to Wikipedia, being the first single woman to adopt a child in her home country.

But at least I beat her to the toast. 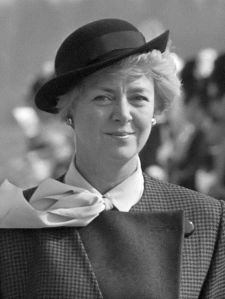 The Iceland President in a marvelous hat.

Finnbogadóttir was born on a toasty spring day in 1930 in Iceland’s capital Reykjavik. Her father Finnbogi Rútur Þorvaldsson (thank you copy-paste) taught at the University of Iceland and her mother Sigríður Eiríksdóttir was a nurse and the head of the local nurse’s association. You could say she came from strong leadership stock. And I think I will.

She came from strong leadership stock.

After graduating high school, young Vigdís headed to Paris to study French Literature. Once she had her BA, she further studied History of Theater in Copenhagen, becoming a rare liberal arts graduate in the modern world to not later work exclusively as a barista.

In the 60s and 70s Finnbogadóttir practiced political activism, protesting against the U.S. military presence in the country,  and became a central figure in the Icelandic theater scene as Artistic Director at the Reykjavik Theatre Company.

In 1980, with the women’s movement in Iceland having gained significant steam Vigdís reluctantly agreed to run for President, and ended up narrowly defeating her three male rivals. Her popularity soared in office, and she was re-elected three more times until she decided to step down at the end of her term in 1996. Imagine that, a politician voluntarily leaving office once they feel they’ve contributed what they can to give way to the next guy. 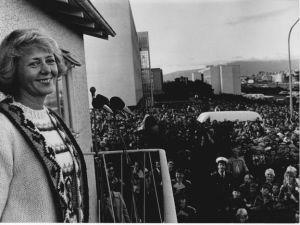 Now in a homely sweater in a pleasing “yay, everyone adores me” mode.

The respect she has garnered in international circles can be easily seen in the impressive collection of animal themed honors bestowed upon her by various countries. These include :

I never realized collars were held in such high esteem by various stately honor granters, but there it is. Extra credit to the British for squeezing a relaxing bath in there.

Co-founder of the Funny Names Blog, Hawaiian shirt enthusiast, and holder of a funny name himself with too many vowels for any sensible person. Currently residing in San Diego, California, scouring through obscure documents on a hunt for more funny names. www.funnynamesblog.wordpress.com
View all posts by Arto →
This entry was posted in funny names in education, humor and tagged humor, iceland, international, presidential names. Bookmark the permalink.