Ransom Eli Olds, Inventor, Automater: Darn, Did I Give That One Away?

In 1889 Ransom married Metta Ursula Woodard. Off to a rolling start.

By 1894 Ransom claims to have built his first steam car and in 1896 he followed up with his first gasoline powered automobile.

Olds Pirate Racing Car driven by the man himself on a Florida beach. He could have said, “Avast there matey. Get out of me way or I’ll run ye over.” But he didn’t. He left them in his dust.

Ransom invented the modern day assembly line. I know, I thought that was a Ford invention, too. Ford borrowed the idea.

He formed the Olds Motor Vehicle Company in Lansing, Michigan in 1897. Needing an infusion of cash, the company was purchased by lumber magnate, Samuel L. Smith, love that alliteration and balance. It rolls off the tongue. Smith became President. He renamed the company Olds Motor Works and Ransom Olds became Vice President.

By 1901, Olds built eleven prototype vehicles, which included models with electricity, gas and steam. He was the only American automotive pioneer to manufacture and sell at least one of each power type.

On March 9, 1901, the factory burned. The only model saved from the fire, the Curved Dash runabout. Later that year Olds pushed hard to sell the Dash Curve at the second annual New York Automobile Show. He dropped the jaws of the other attendees when he haggled with an auto dealer who wanted to buy 500 cars, and unimpressed, he replied, “I would like to see you make this order for a thousand cars.”

While they settled for 750, Olds is remembered for his audacity. The Dash Curve became the first low-priced, mass-produced American automobile. Yep, I thought that was Ford, too.

But wait there’s more, because cash could be an issue, in 1906 he organized two banks, Lansing National Bank and Michigan National Bank. 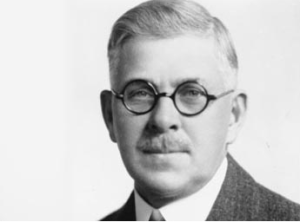 When Sam Smith’s son, Fred, came into the business. Fred’s recurrent clashes with Olds caused Fred to remove Olds from the company.

So Ransom took his initials and ideas and formed REO Motor Car Company. Leading to the creation of the REO Speed Wagon. A vehicle, which inspired a band to take it’s name.

In the meantime, Ransom built a mansion. In the house he installed a technical innovation: a turntable, so he would never have to drive his car in reverse from the garage.

Not satisfied with just inventing cars, in 1913 he purchased over 37,000 acre of land in the northern part of Tampa Bay in Florida. He developed the land, which is now the city of Oldsmar.

He also financed the building of the Olds Tower, completed in 1931. It remains the tallest building in Lansing but renamed the Boji Tower.

General Motors purchased the Olds Motor Company from the Smith family in 1908 and manufactured Oldsmobiles until the lines retirement in 2004. That’s 96-years “Olds”.

23 Responses to Ransom Eli Olds, Inventor, Automater: Darn, Did I Give That One Away?