We have today a very special news report from England. This is perhaps not of as great a historical import as yesterday’s roundup by Mark, but it crossed our threshold of amusement.

The BBC gives us this very special headline that leads us to our story : “Grimsby Town inflatable shark attack fan convicted“.

We learn from the report that Kenneth Meech, a 51-year-old resident of Grimsby in Northern England and local football fan, has been convicted in court of assaulting a steward at a soccer game with an inflatable shark.

Mr. Meech performed the odd battering out of joy as he was celebrating the team’s 3-1 victory over Barnet, but it seems his joy has come at a cost. He’ll have to pay at least £800 in compensation.

On top of it all, I’m delighted report that the victim in the shark battering is identified as one Cgagi Gladyng. 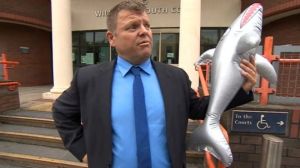 Delightfully, the defendant decided to pose with his inflatable shark in front of the court house.

The report states that “Mr Gladyng, 59, told the court he was hurt by the inflatable which was being waved “like an axe” and described the three blows to his head “as like being hit by a roll of paper“”.

I think we can all imagine the sheer horror of being hit three times with some paper.

To cap it all off, the convicted shark wielder described his reaction to the decision thusly :

This concludes our special inflatable report.

21 Responses to A Special Inflatable News Report from England