Lake Street Dive, I’d like you to meet Fred and Wilma Flintstone

I spent a great hour Saturday smiling at the band Lake Street Dive.

Not because of a funny name, though it might qualify as somewhat of a head-scratcher for this young foursome out of Boston. Let drummer Michael Calabrese explain it on the band site bio page. “We are named in homage to dive bar bands,” he says. “We are, have been, and always will be a dive bar band. Whether we’re playing for 10 people or 10,000 we want them to have that feeling.”

At the M&T Syracuse Jazz Fest it was closer to 10,000. And as I watched lead singer Rachael Price (funny spelling), trumpeter/guitarist Mike “McDuck” Olson (funny nickname), upright bass player Bridget Kearney (funny instrument) and Calabrese play a bunch of great songs, something else somewhat humorous did strike me.

I hope they and their many fans, of which I am now proudly one, take this as a compliment. Because this following foursome is one of my all-time favorites. 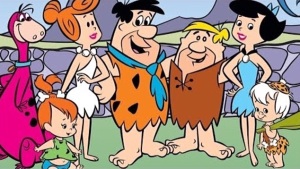 Wilma, Fred, Barney and Betty, with Dino, Pebbles and Bam-Bam. (From article.wn.com)

So today we become here the Blog of Funny Resemblances. Doppelgangers, if you will.

It first hit me while I was watching Calabrese play barefoot on his drum kit. 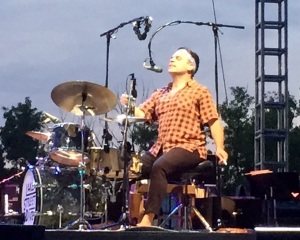 Does he not remind you of Fred Flintstone?

After whispering that fact to my dear wife Karen next to me, she pointed to the versatile Olson. 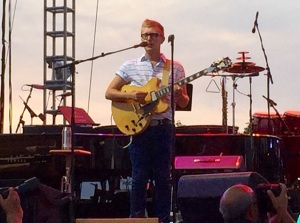 Does he not bring to mind Barney Rubble, she asked me?

OK, we reasoned together, heads close in conspiracy. 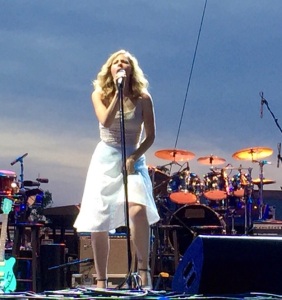 Prie as Wilma Flintstone may be kind of a stretch without the red hair, but she most certainly had her star power. 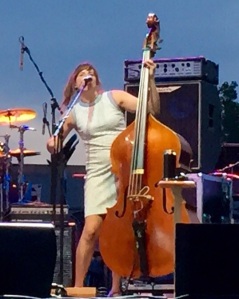 And Kearney can without a doubt carry Betty Rubble’s role any day of the week.

I had the courage to repeat my Fred Flintstone moment to my longtime friend Dave and his girlfriend Sue to the left of us, and they indeed agreed. 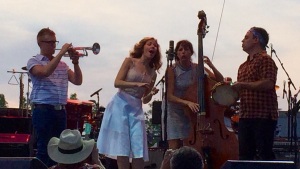 A group shot for best comparison.

Flintstones. Meet the Flintstones.
They’re the modern stone age family.
From the town of Bedrock,
They’re a page right out of history.

Let’s ride with the family down the street.
Through the courtesy of Fred’s two feet.

Mark Bialczak is a veteran journalist. He started his blog, markbialczak.com, in February, 2013, to write about music, entertainment, sports and life.
View all posts by markbialczak →
This entry was posted in funny names in cartoons, funny names in music, funny names in tv and tagged Classic cartoons, doppelgangers, Funny look-alikes, Hot bands, humor, humour, Lake Street Dive, The Flintstones. Bookmark the permalink.

24 Responses to Lake Street Dive, I’d like you to meet Fred and Wilma Flintstone