No FNITN this week because somebody is out in Iceland and Finland, and somebody else is busy making a bunch of science videos and has a lot of random stuff to do and has written the last two FNITNs!

But…. I didn’t want to leave y’all hanging, so I bring you the delightfully strange news that a 15-year-old Iowan named Deez Nuts is polling at 9% in a North Carolina survey. 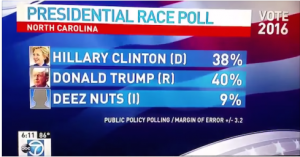 I don’t know much else, other than that the kid seems like a true blue (or true red, or true green because he’s independent?) funny names lover! He said that his next goal is to have a vice presidential running mate, and floated the possibility of Limberbutt McCubbins, a Kentucky cat, who had also filed official presidential paperwork.

Are we about to see a President Deez Nuts? Unlikely, due to that pesky 35-year-old age limit. Not only that, but his favorability ratings leave a bit to be desired. The poll said that 6% of North Carolina voters had a favorable opinion of Deez Nuts, while 13 percent were unfavorable, and 81% weren’t sure. That equals a -7% net favorability rating, and also proves that 19% of people will just make up random stuff for political polls.

We’ve never endorsed a political candidate before at the Blog of Funny Names (although we were blessed last election with Barack Hussein Obama and Willard Mitt Romney), but if Deez Nuts keeps polling in the respectable range, it might be a time to start! I, for one, would love a Nutz-McCubbins ticket, and a surprisingly strong performance in the Iowa caucuses can do wonders for a dark horse political campaign!

Based out of San Diego, California. Co-founder of the Blog of Funny Names. funnynamesblog.wordpress.com
View all posts by Dave →
This entry was posted in Uncategorized and tagged entertainment, humor, humour, names, politics, writing. Bookmark the permalink.

13 Responses to Deez Nuts for President?