Most self-respecting Americans would recognize that mouse and that Disney mustache anywhere. But today we celebrate the man on the right, Ubbe Eert “Ub” Iwerks, aka Walt Disney’s oldest and dearest friend. Ub was born in Kansas City, Missouri in 1901. His father, Eert Ubbe Iwerks, appears, in naming his son, to have simply switched his own first and middle name, a move that seems frankly lazy to me. Father Eert had emigrated to the U.S. in 1869 from the German village of Uttum in East Frisia. In modern Germany, East Frisians in general are the traditional butt of ethnic jokes, an embarrassment that the American-born little Ub was spared.

Forty years after Eert’s emigration, the fully-grown Ub met Walt Disney while working at the Pesmen-Rubin Art Studio. Both moved on to work as illustrators for the Kansas City Slide Newspaper Company, and eventually decided to work in animation. They moved to Los Angeles in 1923 to work on a series of cartoons known as “The Alice Comedies” which combined live action with animation. After the end of this series, Disney asked Ub to come up with a new character. The result was Oswald the Lucky Rabbit, animated entirely by Ub. Universal distributed the series in 1927. At Disney’s urging, Ub began drawing up new character ideas. He sketched various animals, including a female cow and male horse which would later turn up as Clarabelle Cow and Horace Horsecollar. But for now, both were rejected in favor of a mouse. Note the similarities between Oswald (on the right) and Mickey Mouse.

Iwerks (as I’ll refer to him now, both names being equally fun) would tweak Mickey into the familiar version we know today.

The first few Mickey Mouse and Silly Symphonies cartoons were animated almost entirely by Iwerks, including the famous Steamboat Willie. Although he is clearly credited, the public associated Mickey with Disney. Iwerks soon found it difficult to cope with Disney’s demands, and he resented that Walt was getting all the credit for their success. 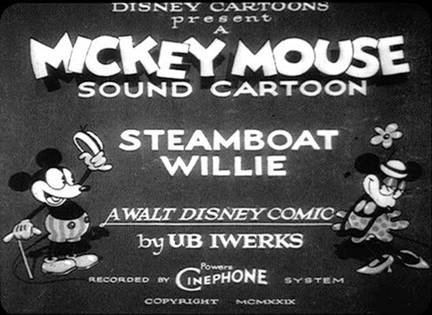 Eventually, Iwerks and Disney had a falling out, and Iwerks made the fateful decision of cashing in his shares (a regrettable move, as his portion of ownership in the Disney Studio would have been worth a fortune). He then started an animation studio under his own name, with Disney competitor Pat Powers. A decade would pass, with Iwerks finding success with Flip the Frog, before he returned to work for Disney in 1940.

After his return to the Disney studio, Iwerks worked on developing special visual effects, as well as processes for combining live action and animation used in Song of the South, and the xerographic process adapted for cel animation. He was also responsible for developing many Disney theme park attractions during the 1960s. He received an Academy Award nomination in 1963 for special effects work he did outside the Disney studio, in Alfred Hitchcock’s The Birds.

Although he passed away in 1971, his legacy lives on. His early animation style was imitated by manga artists Osamu Tezuka and Shōtarō Ishinomori, both fabulous names. Iwerks Entertainment was founded in 1985 in his honor. The 1986 DC Comics character Doctor Ub’x was named after him. And now you know about him, too!

10 Responses to Whistle While Iwerks