Welcome to the Bowling Season, Everybody, Now!

Posted on September 15, 2015 by markbialczak

Yes, I’m among the throng who got back to the lanes last week. A card-carrying member of the USBC, for which I pulled an extra $20 out of my pocket for the honor. And, yes, I do consider this a sport. Not the way I perform it, perhaps, with my average that ended at 163, near the bottom of my 12-team league last year. Also, I do not own a button-down bowling shirt of the kind you see if you’ve stopped on a bowling tournament on TV.

Which I did every week as a kid, with my parents, watching guys named Earl Anthony and Johnny Petraglia and Dick Weber rolling strike after strike. No, those aren’t funny names. The announcer on ABC, though, was Chris Schenkel, and he also used to make a commercial that merely supported “the great taste of beer in a bottle,” which aired on every tournament, which until I turned, oh, 16, I found pretty funny.

My search took me to bowl.com and its list of the members of the United States Bowling Congress Hall of Fame. 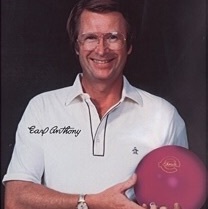 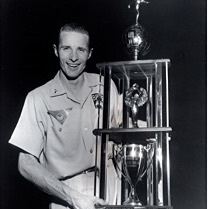 Yes, found the names of Weber, Petraglia and Anthony on the list for “superior performance.” Weber was inducted in 1970, because he won tournaments, amazingly, in six decades. His son, Pete, is also in the Hall of Fame. Petraglia, a native of Brooklyn — no wonder my Brooklyn-born pops loved him so — won his first tournament in 1967, but didn’t get into the Hall until 2009. Anthony, a hard-cranking lefty who started with a buzz cut, was voted the top bowler of the 1970s, and was inducted in 1986. In 2008, he was voted “the Greatest Player in PBA History.”

Of course my eyes wandered down the list. Much further down. To the “pioneer” category. I pictured hardy sorts that had to run down the alley and re-set their own pins, you know? Lug the ball back uphill, in the snow.

That’s where I found two names that forced me to click upon them.

I loved the thought of a Japanese pioneer who went by Fuzzy. A natural. And a bowler who perhaps was helped by divine intervention.

What I found was bowling in the USA’s dirty little secret.

Get this. There was, in the 1900s, a nasty rule in the ranks of the governing body of the sport, the American Bowling Congress. The top of the sport was bigoted. Just like the more publicized cases of baseball and golf.

And these two guys helped get that changed.

The biography for Shimada says: “A strong bowler who was barred from ABC membership because of the Caucasian-Only rule, Shimada was instrumental in promoting the sport to Japanese-Americans. He shared his knowledge as an instructor and promoter throughout California and helped organize the National Japanese-American tournament where he won 13 titles in 43 years of participation. He has five top 10 ABC Tournament finishes and three times won the Northern California BPAA match-play crowns.”

I bow to the tenacity and talent of Fuzzy.

Of the good Reverend: “Father Carow was heavily involved in conducting a bowling program for the Catholic Youth Organization in the New York City area. He became a New York City Bowling Association Director and later an ABC Convention delegate who pleaded with ABC to open its membership to minorities in the late 1940s. The Caucasian-Only rule was changed in 1950.”

Sixty guys in my league, of many ethnicities. Hooray, bowling season.

Here’s the link for bowl.com, the source all photos except for Schenkel.

Here’s the link for Chris Schenkel’s wiki page, the source for his photo.

30 Responses to Welcome to the Bowling Season, Everybody, Now!