PaNaTa, y’all. Do you see this name? With random capitalization? I can’t even hazard as to why they wrote it that way, but goodness, it looks like a series of elements on the periodic table. Protactinium, Sodium, Tantalum. Awesome.

Look at that tree from which she stems!! Puchethi? Fernaty? Chief Tecumseh and Manate. Amazing!

PaNaTa. Now I don’t know if that rhymes with banana, but I sho nuff do know that it’s just one letter’s difference from a Mexican fiesta! Ole! Oh, honey, I wonder if they called her piñata. You know how kids can be.

I guess they didn’t–because her nickname was “Natty.” Now we all know Natty has two meanings; as a smart, stylish dresser, or slang for Natural Light beer, a favorite of poor college students. And glory be, it comes in Tall Boys, for that guaranteed tepid last third of weak beer.

We can rest assured Natty Gregory never had a sip of this Natty. 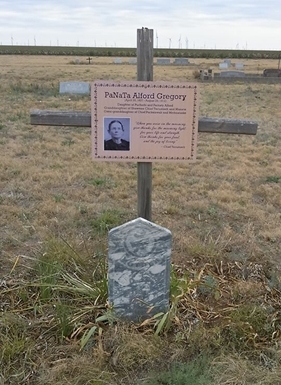 Here lies the grave of old PaNaTa. Note the wind turbines in the background.

Natty was born in St. Clair County, Alabama and died at the age of 75 in her daughter, Josephine Priscilla Berry’s home in Berry Flat, Borden, TX. Per www.findagrave.com, “Natty is the daughter of William Alford and Priscilla Truss.”

Wait a second. What happened to Puchethi and Fernaty? This is confusing. Did they up and change their names like Cat Stevens? Ugh, I haaaate it when people do that.

Well, per www.geneology.com, William was raised by Chief Tecumseh’s sister, Tacumpese, and his Shawnee name was Nay Tha Way Nah Puchethi. Seriously. He was affectionately called PUCHETHEI or PACHETA, which meant “panther.” SHUT UP.  Panther. I can’t even.

And PaNaTa wasn’t even the oddest of his kid’s names. No, sir. Look what he bestowed upon them.

Natty decided she was not going to burden her litter of kids with such crazy talk, so she married the common-named Griffin Clifford Gregory on September 15, 1856 in Alabama and they had themselves a whole litter of kids: William, Josephine Priscilla, Jefferson Davis, John, Mary, Louisa Ann, Thomas E., Maude and Inder. I think we can all agree that Inder was as reckless as it got.

Another confusing thing is that this gravestone says Netty, not Natty. But it does happen. My grandmother’s grave said Maria, and she was a Marie.

In any event, Netty is dead, however you spell it. Just like Jud from Oklahoma. Poor Jud is dead…

Like Loading...
This entry was posted in humor and tagged Chief Tecumseh, fun, history, humor, names, Texas. Bookmark the permalink.