Last week, Mark B. talked about Gump Worsley who’s real first name is Lorne, and Kerbey commented on Lorne Michaels, clearly the stars and the colors were aligning.

Which leads us back to Canadian born Lorne Greene. He didn’t start out as Lorne, no way. He entered this world as Lyon Himan “Chiam” Green. A name not listed in Dave’s famous stage names post last week.

With such a commanding name, why change it? 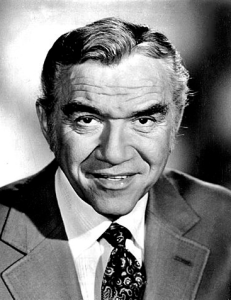 He started out in radio and became Canada’s top newscaster—The Voice of Canada—during World War II. He was nicknamed “The Voice of Doom” because of his deep voice and the awful news he reported. The good news is, he invented a stopwatch that ran backwards. How else do you let your fellow broadcaster know how much segment time was left while speaking on air?

So off to Hollywood in the 1950s, and presto a name change, we have Lorne Greene. Because everything is better if you spell it with an “e” at the end-e.

Which brings us to his wonderfully named wives. His first wife fabulously named, Rita Hands. Unfortunately, they divorced in 1960. His second wife, Nancy Deale—everything is better if you end it with an “e”, including marriage (or it would be pronounced mary-ag, ugh)—until his death in 1987.

Among his many colorful accomplishments he co-hosted the Macy’s Thanksgiving Day Parade with Betty White for nearly a decade from 1963 to 1972. He is probably more famous for his roles on Bonanza as Ben Cartwright and on Battle Star Galactica as Commander Adama.

And he enjoyed a country western/folk singing career off-camera. His only number one hit, Ringo, in 1964. In case you are confused it’s a song about Johnny Ringo, not Ringo Star. Both well named gentlemen.

Writing since she could first hold a pen, Tracy Perkins formed her alter ego, "Fannie Cranium" at the suggestion of her husband. Tracy understands smiling makes people wonder what she’s been up to.
View all posts by Fannie Cranium →
This entry was posted in funny names in tv and tagged actors, celebrities, entertainment, funny names, humor, humour, television, tv. Bookmark the permalink.