For the last few months we’ve been building up to the holiday season—and I did not realize my penchant for red and green. What with Red Smith, Red Green, Lorne Greene and now at the suggestion of Bumba, wonderfully named comedian, Redd Foxx—he double downed on the last letters of his stage name.

Redd came into this world as John Elroy Sanford of Chicago, Illinois. He earned the name Redd for his ruddy complexion and he adopted the name Foxx from Major League Baseball player, Jimmie Foxx.

While still in Chicago, he worked as a dishwasher and was referred to as Chicago Red, not to be confused with his friend and fellow dishwasher, Detroit Red, better known as Malcolm X.

He started his comedy career on the “Chitlin Circuit” in the 1940’s and 50’s. The blue humor, too scandalous to be seen or heard by the main stream circuit. He made comedy records earning him the title, King of the Party Record. The records eventually brought him to the notice of notables Ed Sullivan and Red Skelton. 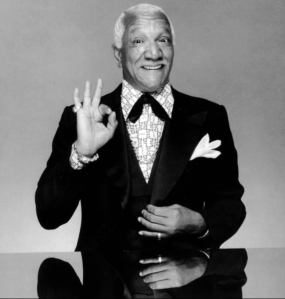 By 1972 Redd starred in “Sanford and Son”, his character, Fred G. Sanford, named for his older brother. Many of the characters on the show were named after people Redd admired.

His character, Fred Sanford, notorious for faking heart attacks, known as “the big one” at the mention of bad news, would clutch his chest and say, “You hear that, Elizabeth? I’m coming to join ya, honey!” He continued to use the bit throughout the rest of his career.

Redd broke color barriers. He was the first black actor to headline shows on all three major networks: ABC, CBS and NBC. He appeared on the cover of TV Guide five times.  He influenced comedians such as Richard Prior and Eddy Murphy both of whom he worked with on “Harlem Nights”.

Sadly issues with the law and financial woes cost him. He lost everything in 1989 to the IRS.

In 1991 he launched his comeback with the TV show “The Royal Family” on CBS. While rehearsing for an episode, Redd had The Big One. Everyone on set thought he was horsing around and did not respond right away. He died later at the hospital.

Because his widow, fourth wife, Ka Ho (Cho) Foxx, could not afford the funeral, his friend, Eddy Murphy, paid for a Hollywood-style send-off.

If you’ve never seen an episode of Sanford and Son, here is a snippet, a face-off between Fred and his arch rival, Aunt Esther (LaWanda Page).

That’s a wrap (red, gold, silver, green—your choice) for me this year. Happy holidays everyone. See you next year.

Here’s the source for the photo of Redd Foxx.

Writing since she could first hold a pen, Tracy Perkins formed her alter ego, "Fannie Cranium" at the suggestion of her husband. Tracy understands smiling makes people wonder what she’s been up to.
View all posts by Fannie Cranium →
This entry was posted in funny names in comedy, funny names in tv and tagged actors, comedy, entertainment, funny names, television, tv. Bookmark the permalink.