For 3 Laps, All the Drivers Chased Young Elliott

The NASCAR folks used to call his old man Wild Bill because of his fearlessness steering through right spaces. Later they called him Million Dollar Bill because he was so good beating everybody else to the finish line. But the most popular nickname for Bill Elliott was Awesome Bill from Dawsonville.

Not a bad way to go round and round those NASCAR tracks. 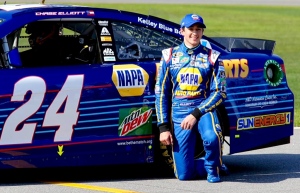 The 20-year-old and his car. (From Getty Images)

Now his son is making a name for himself in the top level of the sport. At the age of 20, Chase Elliott has taken over the No. 24 car driven for a quarter-century for Hendrick Motor Sports by the legend Jeff Gordon, who retired after last season and now sits talking about his former colleagues with Darrell Waltrip and Mike Joy in the FOX TV booth.

For the Big Daddy start of the 2016 NASCAR Sprint Cup season, Chase Elliott took that No. 24 car around that big track fastest of all drivers in the qualifying race to win the pole position. That means he started the Daytona 500 first. Which to my mind of course brought the thought that if he scooted out fast enough — which his track record of success, pun intended indicated he would — all the other drivers would be Chasing Chase for awhile.

Alas, he led just three laps. And then on lap 18, he spun out and into the infield grass. That resulted in damage to the car that forced a return to the garage and kept him off the track until lap 40. Young Chase Elliott, a five-time winner since 2014 on the NASCAR series one-step down including this year’s opener a day before the Daytona 500, finished 37th in the big one.

But the most disappointing thing was the discovery that his real name is the same as his dad’s. William Clyde Elliott II is hardly as race-appropriate as Chase Elliott.

But further research revealed that his parents first called him Chase shortly after birth. Junior was obviously already taken around the track compounds. And officials had yet to adopt the multi-race playoff format for the season title, to be called The Chase …

And, hey, folks, he finished a very respectable eighth Sunday in Atlanta.

Here’s the link for the bio page on Chase Elliot’s site.

Mark Bialczak is a veteran journalist. He started his blog, markbialczak.com, in February, 2013, to write about music, entertainment, sports and life.
View all posts by markbialczak →
This entry was posted in funny names in sports and tagged Auto Racing, Bill Elliott, Chase Elliott, Daytona 500, nascar, Sprint Cup. Bookmark the permalink.

18 Responses to For 3 Laps, All the Drivers Chased Young Elliott