As we prepare to flip our mental calendars to April, thoughts turn to the outdoors. Green grass, sprawling acres of it to walk, inhale deep into souls, feel under our toes.

I’m talking golf here. Because, I do. And I’m hoping to get out there on a course in the Syracuse, N.Y., area soon.

And swing the sticks just like a guy who was, just like me but some 61 years prior, born in Brooklyn. 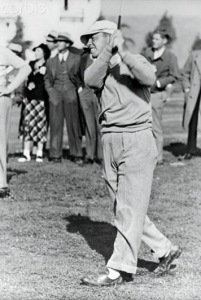 Wiffy Cox sure is a funny name from the world of golf. He was a good one, too.

Wilfred Hiram Cox was born on Oct. 27, 1896, and grew up in a tough Irish-Italian neighborhood of Brooklyn. Looking to earn some cash, he set forth north, to Westchester Country Club, where he learned the honorable trade of lugging the club’s of the well-to-do around that plush golf course. 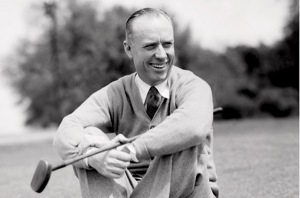 Happy on the links.

Wiffy Cox became a caddie. And then, according to WikiPedia, he learned to play the game, at sunset with clubs borrowed from the pro shop. The diminutive Cox had a hot-temper and a reputation for foul-mouthed, trash talk among his fellow players.

Sort of an early 1900s Tiger Woods without his own caddie/bodyguard Stevie Williams to shoo away interlopers, no?

In any case, Cox was pretty good, too. No Woods, mind you, but talented enough to not only turn professional but win 12 tournaments, including 12 on the PGA Tour.

He never won a major, but he did finish tied for third in the 1934 U.S. Open. With the Masters kicking off this year’s major rotation next Thursday, you can note as you’re following defending champ Gordon Spieth on your wide-screen that Wiffy battled that famed circuit in Augusta, Ga., to a 12th-place finish in 1937. I wonder if that included any thrown clubs?

I’d call 1931 his best year. He won four times on the tour, including an event with the expansive title of The North and South Open, and earned a berth on the U.S. Ryder Cup squad, where he won both his matches against the golfers from the U.K.

After his playing career, Wiffy Cox landed an extremely cool club pro job. He was the top guy at a joint called Congressional. That’s an extremely exclusive course-and-club in Maryland, just outside the nation’s capital. I dare guess that Wiffy Cox rubbed elbows with U.S. Presidents.

Here’s the source for the WikiPedia biographical information about Wiffy Cox.

Mark Bialczak is a veteran journalist. He started his blog, markbialczak.com, in February, 2013, to write about music, entertainment, sports and life.
View all posts by markbialczak →
This entry was posted in funny names in golf and tagged Brooklyn, Caddies, golf, The Masters, U.S. Open, Wiffy Cox. Bookmark the permalink.

27 Responses to Stare at the Little White Ball and Swing, Just Don’t Wiffy