Just a Twinkle in a Dimple Rinkle? Not so Simple: Breathtaking Dynastic Beauties of Bollywood

Whilst undertaking groundbreaking field work in Funny Name Theory, our intrepid researchers came across a line of names that seemed too good to be true. Our first impulse was to call a press conference and announce the stunning results to the world immediately. We could just picture it: a Medusa head of microphones facing us, a shimmering whirr of photo flashes, a disco party reception, our pictures in the glossies, and a whole lot of grant moolah from the major foundations to fund construction of our research facilities.

Then some of our cooler heads prevailed. Science, you see, is not about glamour, fame, or gain. No, it is about knowledge, truth, intellectual integrity. And so it is that now, after painstaking months of verification, cross-checking, and analysis to rule out statistical anomalies, we finally present our results to the waiting world . . . 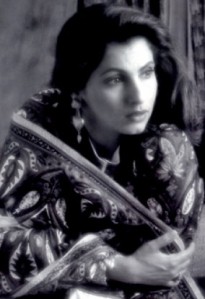 Rarely is the beauty of astounding scientific results surpassed by the beauty of the scientific subject matter itself, but this is one such happy instance. The BoFN Institute of Noministic Inquiry joyfully presents to you women of beauty, women of talent and of creativity, women of achievement and accomplishment, women who succeeded not only on the silver screen but in fashion, in design, and in business.

Ladies, gentlemen, distinguished colleagues, we give you four outstanding women, each of whom could stand alone as a proud BoFN subject in her own right, but who together, like a veritable Avengers team of loveliness, have produced a bounteous cluster of amazing names spanning two generations and two branches of their fabulously named Bollywood clan.

We present to you first Simple Kapadia. She debuted on Bollywood’s silver screen at the tender age of 18, continued as a distinguished Bollywood actress, and ultimately established herself as a highly respected costume designer whose ensembles were sought out by the best of the best. Though immortalized in tantalizing dance sequences like the one above, Simple Kapadia left us much too early, in 2009, after a battle with cancer.

Fortunately for us, Simple was survived by her elder sister, Dimple, and her nieces, Dimple’s two daughters Rinkle and Twinkle.

Dimple Kapadia was married to Rajesh Khanna, the co-star in her sister Simple’s debut film. This, Dimple’s only marriage, did not last, but it graced the world with those two lovely daughters (about whom we will hear more shortly). Dimple Kapadia is the true Bollywood legend, an astonishing beauty with an acting career spanning decades and earning an ever growing mountain of plaudits, nominations, and awards.

Our BoFN tagline is always true, yet never was it more so than for these magnificent ladies!

19 Responses to Just a Twinkle in a Dimple Rinkle? Not so Simple: Breathtaking Dynastic Beauties of Bollywood