When Your Name Is An Adjective That Looks Like An Adverb

Today’s beholder of a funny name is testerosterone-filled trabadour Manly Wade Wellman. Technically, a troubadour is a composer or poet, while Wellman was an author of sci-fi and fantasy, but writing is writing, no?

Before we dig into the person that was Wellman, I’d like us to reflect on how his name contains both Manly and Man. And if, purely hypothetically, one were to drink three pints of Blue Moon and glance at his name, it might appear to say Manly Well-Made Man. His image does not betray his name.

As they say on Chat Stew, “So meaty!”

Wellman passed away 30 years ago this month, but during his nearly 83 years, his science fiction and fantasy stories appeared in such pulps as Astounding Stories, Startling Stories, Unknown and Strange Stories. He was a contributor to the legendary Weird Tales, which published his fantasy and horror stories set in the Appalachian Mountains.

Wellman was born in 1903 in the deliciously-named village of Kamundongo in Portuguese West Africa, now Angola. His father was stationed as a medical officer and used his skills to restore the vision of a powerful chief, who promptly adopted little Manly as his own.

After mastering the native dialect, Wellman and his legit family headed to the USA, where he pursued virile activities such as football, for which he got a scholarship. For fun, he earned a law degree. But like his brother, Paul, the urge to put pen to paper overwhelmed him. One teacher remarked of Wellman’s story, “Back to the Beast,” “Your work is impossible!” And yet editor Farnsworth (yes, Farnsworth) Wright bought it and published it in Weird Tales, so it clearly was possible.

Soon he found a mate who published creepy stories in the very same magazine. During The Depression, he married horror writer Frances Obrist “Garfield” (her pen name) and moved to New York, where was he was known to always order wine with his lunch. In 1939, he moved to New Jersey and continued to write stories for comic books and pulps. 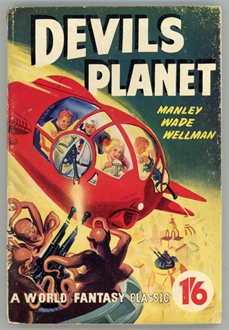 After his work Rebel Boast was nominated for the Pulitzer Prize, he moved his family to North Carolina to be near the folksy backwoods people (wikipedia’s words, not mine) of whom he wrote. In keeping with his namesake, Confederate General Wade Hampton, he did more manly things like build a vacation cabin in the Smokies, next to his funny-named friend Obray Ramsey, where they would play mountain music and down illegally-distilled whiskey.

Though a successful writer, he supported himself by working on farms, in cotton gins, and as a bouncer in a dance hall. According to http://www.david-drake.com, he also worked as a reporter in Wichita, Kansas. On good terms with the police, Manly frequently accompanied them during operations.

One night Manly went along on a raid on a roadhouse. Several men were caught in the reception area when the police burst in. One of the cops handed Manly a heavy blackjack (a hand weapon typically consisting of a piece of leather-enclosed metal) and told him to hold the men there. The police went into the back of the building where the gambling equipment was.

After a minute or so, one of the men in the front said, “I’m going to get my coat and get out of here.”

“Stay where you are!” Manly said.

“The hell I will,” said the man as he lifted a sheepskin jacket hanging with other coats in an alcove. Manly slammed him across the side of the head with the blackjack. The man dropped like a stone, and the jacket thudded to the floor.

Like Loading...
This entry was posted in Funny Names in Literature, humor and tagged Authors, fiction, funny, Pulps, science fiction. Bookmark the permalink.