Today I am standing on my soap box—because I’m too short for you to see me otherwise—and whispering, because if you want people to pay attention, you whisper. And have a slice of Chocolate Bourbon Cake. I understand it’s one of Dave’s fav’s. 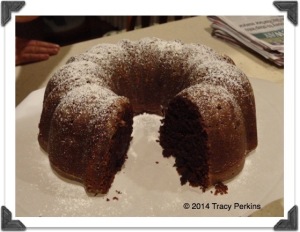 Let the whispering oratory begin . . . I won’t stand for it anymore. There are consequences and they must be dealt with.

Not since Arto wrote the notable Norbert Wiener post, postulating the Wiener Sausage, have I been this warmed up—except in August and it’s in the upper 90’s or low 100’s (Fahrenheit)—about a missed opportunity. In that case, to use the Wiener Sausage as a base for an episode of the Big Bang Theory. But that’s something else entirely.

I’m talking about amending the funny names theorem, people. We need an amendment. I’m convinced that people having two or more first names as their full name should also be considered for funny name glory.

Case in point, we currently support:

Having two last names as your full name is a surefire way to be considered for funny names glory.

Why not add The Arthur Lee Samuel Consequence?

In case you don’t know Arthur Samuel, in 1959 he defined machine learning: A field of study that gives computers the ability to learn without being explicitly programmed.

The consequences today are, of course, data mining. But that’s a different story.

Arthur was born in 1901 in the fabulously named Emporia, Kansas. He graduated from the College of Emporia in 1923, leading him to the a master’s degree in electrical engineering from MIT in 1926.

There are no photos in the public domain of Mr. Samuel. That being said, if you download AI Magazine’s Volume II Number 3 issue from 1990, a very lovely picture of Mr. Samuel awaits you. As does a comparison of Drosophila fruit flies and computer games. Just saying.

Arthur created the Samuel Checkers-playing Program. It is credited as the world’s first self-learning program.

Clearly Arthur was destined to pull the mathematical sword from the checkerboard.

He worked his way through notable institutions such as Bell Laboratories, The University of Illinois (Go fighting Illini), IBM Poughkeepsie Laboratory, and Stanford University (I’m rooting for the Stanford Tree on this one because the color, Cardinal, throws me for a loop).

Arthur was awarded the Computer Pioneer Award in 1987, landing him in the company of some wonderfully named companions.

That’s just a sampling my friends, but I digress. Back to my point, in this year of electoral rhetoric, I vote for an amendment to the Funny Names Theorem to induct The Arthur Lee Samuel Consequence: People having two or more first names as their full name should also be considered for funny name glory.*

By the way, you have some cake crumbs on your shirt.

Okay, you can turn the volume back down.

*Unfortunately all three of his names could be considered last names leading back to the Baldwin Churchill Rule. (Ignore the conundrum behind the curtain—thus the consequence).

Writing since she could first hold a pen, Tracy Perkins formed her alter ego, "Fannie Cranium" at the suggestion of her husband. Tracy understands smiling makes people wonder what she’s been up to.
View all posts by Fannie Cranium →
This entry was posted in funny name theory, funny names in science, humor, humour and tagged bio, biography, funny, funny name, funny names, history. Bookmark the permalink.