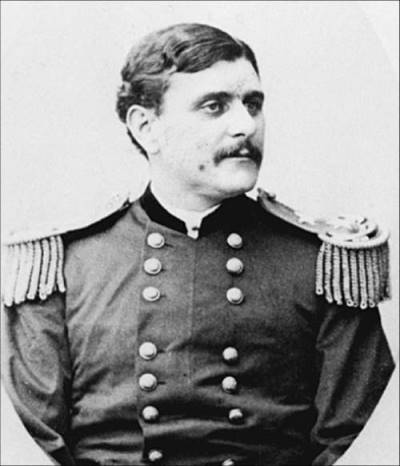 Who’s the dapper Union general in a double-breasted coat, you ask? Why, it’s none other than Galusha Pennypacker in his Civil War days. Pennypacker (unlike many hard-to-pronounce names on this blog) is a jubilant joy for the tongue, like pedalpusher or Miss Moneypenny. It also brings Mother Goose to mind: Peter Piper picked a peck of pickled pennypackers.

Born on the first of June, 1842 in Valley Forge, Pennsylvania, Pennypacker’s life began with tragedy; his mother passed while he was yet a baby, and his father, a veteran of the Mexican-American war, decided he would rather go to California to see if there was gold in them thar hills than provide for his son. Raised by his grandmother, he grew up in the very home occupied by George Washington and used as headquarters during the Revolutionary war, in which his grandfather fought.

In 1865 at the Second Battle of Fort Fisher, he received a wound considered fatal. As for the North Carolinian who shot him, in Pennypackers’s own horrified words, “my men dashed out his brains with clubbed muskets.” Ouch. General Terry promised that he would receive a brevet promotion for his conduct that day, pronouncing Pennypacker “the real hero of Fort Fisher” and remarked that the fort would not have been taken without his bravery.

Pennypacker was awarded the Medal of Honor, with a citation reading, “Gallantly led the charge over a traverse and planted the colors of one of his regiments thereon, was severely wounded.” Have you ever charged over a traverse?

Pennypacker endured months of recovery in the hospital (though never fully healed) before receiving a full promotion to brigadier general of volunteers at age 20. He still stands as the youngest person to ever hold the rank of BG in the army. He also was the only general too young to vote for the POTUS who appointed him.

Both Pennypacker and George Armstrong Custer, two of the youngest generals in the Civil War, were 5th cousins, both being descendents of Paulus van Haren Kuster. Say that name aloud. There is no weakness there.

The Galusha Pennypacker Statue, in Philadelphia, is located off the north east side of Logan Square. Where did his shirt go?

Pennypacker remained in the Army after the Civil War, being commissioned as Colonel in July 1866. He retired in July 1883.

Nearly fifty-two years after the Civil War, Pennypacker died from complications of his Civil War injuries on October 1, 1916. They packed Pennypacker in the ground of the Philadelphia National Cemetery, in grave 175.

Like Loading...
This entry was posted in humor and tagged civil war, history, military, names. Bookmark the permalink.