There’s are two phrases I might shout out when I hear somebody come down the road of life saddled with a certain sort of name.

Yes, I did this even before I wrote for BoFN.

Say baseball player like Henry Aaron comes strutting to the plate. From me in the stands, or my recliner, would come: Get a last name!

Or if I were in a different mood:

Get a first name!

It does depend on how you look at it, doesn’t it?

So what do we make of Ward Wellington Ward, an architect who designed houses 100 years ago that are still quite famous in my hometown of Syracuse today.

Get another name! just doesn’t quite do it justice.

Ward Wellington Ward moved from New York City to Syracuse, New York, in 1908 to practice architecture. During the next eighteen years, he designed over 200 private residences in upstate New York. Most of these works stand today as eloquent testimony to Ward’s talent and show him to be a figure of historical importance within the Arts and Crafts movement in America.

Twenty-six homes and two other buildings designed by Ward and located within the city of Syracuse were listed on the National Register of Historic Places on February 14, 1997.

He was influenced by, and contributed to, the Arts and Crafts movement in architecture. Ward’s work is in varying styles, but the houses most typically include crafts-like details such as decorative cutouts in shutters. His designs almost always include garages, gateways, and other small structures like gazebos.

Yet somebody had to give this poor guy the same first name as his last name. At least his middle name is a mouthful in the middle of that Ward sandwich. 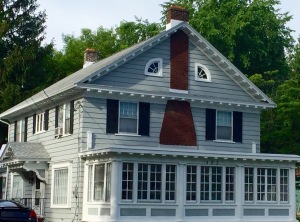 It sits a couple blocks from the Liverpool Public Library, and really is quite striking.

My great and longtime friends Theresa and David live in a Ward Wellington Ward house, brought back to a most beautiful state by their loving care.

But I can only imagine what it was like to live with that name.

Ward Ward all through school? Kids don’t use middle names, do they?

Ward Wellington Ward lived to be just 57, and spent the last six years of his life in a hospital. What ward did they have to go to visit Ward Ward?

Wonder if it all would have went down differently if his parents had named him William.

Mark Bialczak is a veteran journalist. He started his blog, markbialczak.com, in February, 2013, to write about music, entertainment, sports and life.
View all posts by markbialczak →
This entry was posted in Funny Names in Architecture and tagged Get a first name, Get a last name, Ward Wellington Ward. Bookmark the permalink.

31 Responses to Couldn’t somebody build Ward Wellington Ward another name?