Greetings funny names fans. Today we’re traveling in the “Not-so-way-back-machine” to a time when the world was in black and white, if you watched television, to visit with one of the greatest comedians of the 20th century. 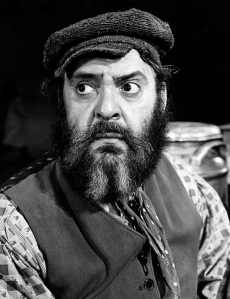 If this man represents zero, we may have to rethink the numbering system.

Born Samuel Joel Mostel, his mother, Cina “Celia” Druchs Mostel, nick named him Zero allegedly trying to inspire him to do better in school so he wouldn’t amount to zero. It must have worked be was able to speak four languages, English, Yiddish, Italian and German, helping him reach more of New York’s audiences.

Zero was also a prolific painter. While still in school his mom would dress him up in a velvet suit and send him to the Metropolitan Museum of Art to practice copying masterpieces. He painted John Alexander White’s “Study in Black and Green” everyday, entertaining the museum visitors.

Mostel didn’t adopt the name Zero until press agent, Ivan Black, created the stage name for him when he started his career as a nightclub comic at the age of 27—because the nightclub owner didn’t think Sam Mostel was a good name for a comedian.

As with most comedians, life was not always easy. He was drafted by the Army in 1943 then discharged from service five months later for an unnamed physical disability. So he entertained service men through the USO until 1945.

Then the dark years when he was blacklisted and forced to testify before Congress and the House Un-American Activities Committee (HUAC) for his activities with the Communist Party. He was no longer allowed to perform, for the USO or professionally on stage or in the movies.

His testimony made the Congressmen look foolish and won him the admiration of the Blacklist community because he did not name names and stood up for his right to privacy of his personal political beliefs.

Because of the Blacklist, his family struggled through the 1950’s with little income. By 1957, Toby Cole, a New York theatrical agent who opposed the blacklist, contacted Mostel and asked to represent him. It revived Mostel’s career.

Zero hit his heights in the 1960 being cast in the role of Tevye in the original Broadway production of Fiddler on the Roof. He created the cantorial sounds made famous in songs like, “If I Were a Rich Man.” Then Mel Brooks, via the aid of Mostel’s wife, Kate, convinced Mostel to take the original role of Max Bialystock in The Producers, both on stage then film. If you were to see the original version with Zero then the performance reprised by Nathan Lane, you will see Lane’s homage to Mostel in his creation of the character, right down to the hairdo.

Zero’s career ended in 1977 when he was preparing for the role of Shylock in a re-imagined version of The Merchant of Venice. Always a large man, he went on a starvation diet and lost nearly 100 pounds for the role. One day he passed out in his dressing room and was sent to the hospital with pulmonary distress. His prognosis was for recovery, however, he died a few days later from an aortic aneurysm.

Author Arnold Wesker wrote a book about the ordeals besetting the show ending in Zero’s death called, “The Birth of Shylock and the Death of Zero Mostel.

And so Zero, cheers to the man who made something out of nothing.

Writing since she could first hold a pen, Tracy Perkins formed her alter ego, "Fannie Cranium" at the suggestion of her husband. Tracy understands smiling makes people wonder what she’s been up to.
View all posts by Fannie Cranium →
This entry was posted in funny names in art, funny names in comedy, funny names in movies and tagged actors, bio, celebrities, entertainment, funny, humor, humour. Bookmark the permalink.