Hello, dear readers of Funny Names! Today we learn about an odd fellow indeed. On this very day in 1959 (the same year that the US would grant statehood to both Alaska and Hawaii and then ne’er again add a star to our unfurled Stars and Stripes), little future-musician Blixa Bargeld was being birthed across the ocean. Presumably he looked as all infants do, squishy and diminutive, but then he grew up and made some questionable life choices. See below. 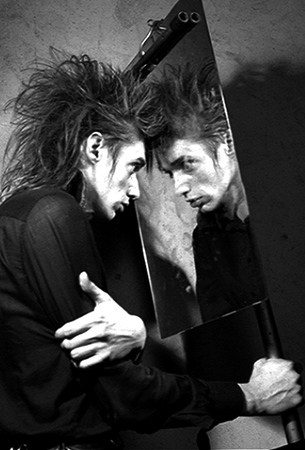 It’s like a goth/punk Edward Scissorhands stapled his head to a mirror during a rebarbative hallucination. But let’s not get ahead of ourselves.

This precious child was initially born with the perfectly good name of Christian Emmerich. Growing up in West Berlin, his first album was Pink Floyd, but he was later influenced by German rock (Krautrock) acts Kraftwerk, Neu! and Can. When he left home in the late 70s to pursue music, he decided to create a stage name to go with his new persona.

After some thought, he decided upon Blixa, a German brand of blue felt pen, and Bargeld, which is German for cash.

Let me get this straight. The name he chose was: pen + cash.

That’s like if I changed my name to Sharpie Benjamins. Of course, they don’t have Benjamins in Germany, where he was born–because Ben Franklin isn’t on their $100 bill. But did you know the word “dollar” comes from German word “Taler”? Per http://www.euro-dollar-currency.com, taler is short for Joachimstaler, the German name for a town where coins called “Taler” were first minted at around year 1500.

Taler, taler, bill, y’all. Listen to me, gettin’ all hip-hop up in here.

But Blixa Bargeld was anything but hip-hop. In 1980, he founded his own group Einstürzende Neubauten, which as we all know means “collapsing new buildings.” Isn’t that fun? Sounds like a structural issue.

Notable Australian musician Nick Cave of  Nick Cave and the Bad Seeds was touring in Amsterdam when he had the (mis)fortune of seeing Bargeld’s band on TV. Per wikipedia, Cave described the music as “mournful,” Bargeld as looking “destroyed,” and his screams as “a sound you would expect to hear from strangled cats or dying children.” They later met in a bar (where Bargeld pretended not to know English despite that he full-well did), and eventually Cave invited him to join his band as a guitarist (at which Bargeld was skilled) and as a backing vocalist (perhaps he liked strangled cats?).

Despite his eccentricities, he has continued his career in music–with wonderfully-named folks such as sound engineer Boris Wilsdorf, collaborator Alva Noto, and Italian composer Teho Teardo.

Age has not diminished his ability to focus on the mournful and depressing; in November 2014, the album, Lament, was released. It was described as a “concept album based on a live performance and installation commissioned by the Flemish city of Diksmuide, Belgium to mark the centenary of the start of the First World War in 1914.” Festive! And on that note, this is Sharpie Benjamins, signing off.

Like Loading...
This entry was posted in funny names in music, humor and tagged funny, music, names. Bookmark the permalink.

23 Responses to Blixa Bargeld Just Needs To Be Held