Welcome new readers! Sometimes I like to stretch the limits of funny name-ology like a two-sizes-to-small-1974-purple-polyester-pantsuit because someone with a name that is not so funny gives life to fictional characters who are.

Have you ever wondered who was the voice behind Snidely Whiplash? Disney’s 1953 animated movie Peter Pan’s Captain Hook? Or who inspired Futurama’s “Robot Devil”? The gifted actor and comedian, Hans Conreid is the answer to all three. 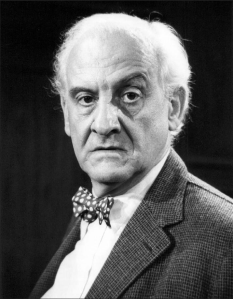 Hans Conreid could have said, “Diction made me famous,” but he didn’t.

Hans Georg Conreid, Jr. was the product of Hans Georg Conreid and beautifully named Edith Beryl (née Gildersleeve)—no relation to the fictional character, Throckmorton P. Gildersleeve. His father an immigrant from Vienna, Austria, and his mother a descendant of the Pilgrims.

Hans started out in radio in the late 1930’s. He once said of his first assignment on radio, “I had the part of a Swiss guardsman. I had nine lines, and my tenth was a death rattle. My fee was $5.”

By 1941 he appeared in a column of none other than Hedda Hopper’s Hollywood. He specialized in playing quirky characters particularly suited to his impeccable diction and intimidating growl.

He performed in nearly 100 films, appeared on stage, radio, and television.

He was one of the most successful freelance performers of his time.

He played Dr. Terwiliker in Dr. Seuss’s “5,000 Fingers of Dr. T” a 1953 fantasy movie grown into a cult classic about a 9-year-old boy, Bart Collins, being forced into playing the piano and Bart’s fantasies about his tyrannical piano teacher possessed with the idea of making 500 boys play the piano at his institute. The movie bombed at the box office, but through the magic of television it’s repeated airings made it into the movie Hans had hoped it would be.

In this clip, the unlikely adult hero and plumber, Mr. Zablodowski engages Dr. Terwiliker in a hypnosis duel in order to free Bart’s mom from Dr. T’s clutches.

Hans and his wife, Margaret, had four children, Trilby, Hans III, Alexander, and Edith. The wonderfully named Trilby’s only movie performance was as an infant with her dad in the zany movie “The Twonky,” a story of a college professor who discovered his TV is possessed by something from the future trying to control his every move. It too bombed at the box office.

During the 60’s and 70’s and early 80’s he made guest appearance on many of the favorite shows of the time. From I Love Lucy as the English tutor, Percy Livermore, to Laverne and Shirley, Fantasy Island, The Love Boat and Hogan’s Heroes to name a few.

The man who gave us so much laughter continued to give. He worked until the day of his passing, January 5, 1982, then donated his body to science.

Please consider supporting our founder, Dave, in his battle with cancer.

Writing since she could first hold a pen, Tracy Perkins formed her alter ego, "Fannie Cranium" at the suggestion of her husband. Tracy understands smiling makes people wonder what she’s been up to.
View all posts by Fannie Cranium →
This entry was posted in funny names in comedy, funny names in movies, funny names in tv and tagged actors, bio, biography, celebrities, entertainment. Bookmark the permalink.