Posted on February 5, 2019 by Fannie Cranium

Greetings Funny Names Fans! Today I’m celebrating a milestone—six years of contributing to this wonderful blog. So what better way to celebrate than revisiting my first post on the BoFN. Without further ado, take it away Fannie of six yester-years ago.

Chicken, Alaska, not to be confused with Baked Alaska, is a town of no large proportions and a delicious name.

There may be other cities in the US in which Chicken appears in their name, but none so elevated as Chicken, Alaska, located just north of the 64th parallel at 1,621 feet. Sandwiched between the the towns of Eagle and Tok (pronounced Tōk). I’m making no judgement here but the brownies may be delicious. Settled in the late 1800’s by gold seeking miners near the south fork of the 40-Mile River before the Klondike Gold Rush.

In the beginning residents wanted to name the town Ptarmigan but couldn’t agree on the spelling. Nor did they want the name of their fair town to be an embarrassment. So when they incorporated in 1902, they choose the name Chicken. They’ve made the most of it ever since.

Depending on who you ask, there may be between 6 and 37 year round residents. There’s no electricity (except by generator), no phones, no internet (they have a website but it’s managed outside of Chicken) and no central plumbing. I’ve used their public outhouse, the Chicken Poop. In the local vernacular, it’s a “four holer” and you don’t have to cross the road to use it.

Now this is the ultimate in marketing.

The main street boasts The Chicken Post Office, Chicken Liquor Store, Chicken Saloon, Chicken Mercantile Emporium, (where I purchased a copy of Outhouses of Alaska, a must read for any outhouse user), and Chicken Creek Cafe, which I probably should have mentioned before the outhouse. They keep the mascot chickens between the cafe and saloon. However, there was no sign explaining which came first. . . 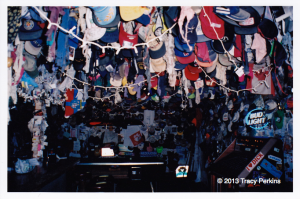 Some things you just have to see for yourself.

The colorful ceiling of the saloon is lined with burned undies and baseball caps. In questioning the bar tender, he demonstrated this feat with a small home made cannon and a fellow traveler’s cap. After stomping on the flaming cap, he attached it to the ceiling. I’m sure they’ve run out of room by now. (Update: They did remove all of the caps and underwear, not sure if they’ve started over again.)

To get the cluck to Chicken try traveling on the gravel paved Turner Highway, pot holes included for your driving pleasure. Then there’s the Chicken Airstrip, if you prefer to travel where Chickens don’t fly. I doubt they call it the Chicken Strip.

There may be fifty ways to leave your lover, but there’s only two ways to get to Chicken.

For some fun reading, check out the Chicken Alaska Not So Frequently Asked Questions. It’s a hoot or is that a cluck?

Many thanks to Dave, Rob and Arto for inviting me to join the world of funny name appreciation. 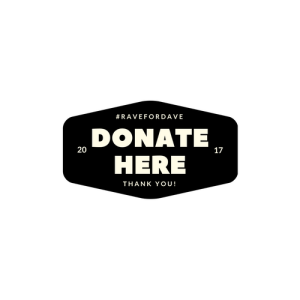 Writing since she could first hold a pen, Tracy Perkins formed her alter ego, "Fannie Cranium" at the suggestion of her husband. Tracy understands smiling makes people wonder what she’s been up to.
View all posts by Fannie Cranium →
This entry was posted in funny place names, humor. Bookmark the permalink.