Warmest winter greetings to you, BOFN readers! Today’s interesting name offers a plethora o’ vowels, reminiscent of a Hawaiian-themed Bing Crosby Christmas song. Join me as we shine a light Ro Lady Lala Mara, the wife of modern Fiji’s founding father, Ratu Sir Kamisese Mara. Ratu means Chief, and Ro was the title she was given. Below is Castaway Island in Fiji. Isn’t it lovely? 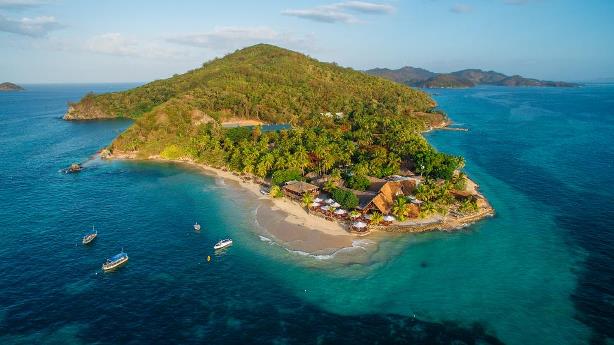 While her husband was born with the amazing name of Kamisese Kapaiwai Tuimacilai Uluilakeba (which contains all the vowels save O), his wife’s name contained all of them except E. I advise some vocal warm-ups before attempting to say it: Litia Cakobau Lalabalavu Katoafutoga Tuisawau. That wouldn’t fit on a drivers license.

It’s a lot to take in. They are equally amazing names, no? However, in this era of #metoo and diversity, one is forced to choose the XX chromosomes to celebrate. And really, Lala Mara sounds like the first syllables a baby speaks. Infant gibberish. Lala Mara, Mama. Can you hear it? No disrespect, of course, to the Ro Lady.

Lala Mara had a reputation of wielding considerable influence on her husband. She was not playing. And she had plenty of time to assert that influence during many years of political power. Her husband served as Chief Minister of Fiji from 1967 to 1970, when Fiji gained its independence from the United Kingdom, then became the first Prime Minister from 1970 to 1992, and finally filled the role of president from 1993 to 2000. She herself was a Fijian chief, often representing Fiji abroad, and was active in the Great Council of Chiefs.

So it should come as no surprise that when a coup d’état deposed her hubs from his presidency, she had his back, pointing fingers at accusers. At the Great Council of Chiefs, she accused these “false prophets” of inciting racial strife and greed. They soon retired to his native island of Lakeba. Theirs was considered a dynastic marriage, as it united two powerful feudal families, and it stood the test of time, lasting 54 years, until Ratu Mara’s death in April of 2004.

During the grieving process, her son-in-law, Ratu Epeli (not to be confused with Epilady) Ganilau, was asked to step down as chairman of the Great Council of Chiefs. This unfortunate turn of events was thought to precipitate her own fatal heart attack, announced just three months after her husband’s passing. A one-year period of mourning ensued. RIP, Litia Cakobau Lalabalavu Katoafutoga Tuisawau.

Like Loading...
This entry was posted in humor and tagged Fiji, funny, funny names, names, politics. Bookmark the permalink.